ESTHWAITE WATER TROUT FISHERY REPORT 11/5/16
The Trout fishing here at Esthwaite has been great recently. It’s not been easy , challenging is the word. But right up until the beginning of last week it was almost winter conditions. In the space of a week or so the weather has picked up. Water temperatures are on the rise and it’s an improving picture! There is plenty of surface activity. Buzzers and Alders are coming off the lake in numbers and there’s one or two damsels starting to appear!
All methods are working at present and there’s plenty of fish coming from both the boat and the bank! There’s still fish being taken in Stockie bay. Strickland bay is also worth a thrash! Up in the North basin Grubhole and Swimming pool are also the places to head for. Meanwhile from the bank. The car park banking is fishing well as is the point opposite the ticket office and the boathouse stretch on the Eastern bank.
Johnathon Taylor from Preston landed 4 nice brown’s to 2lb+ on sinking line and damsel nymph combo from the boats. Tim Jenkins from South Wales also had a great day on the boats, landing 3 nice fish on floating line and traditional wets, including butcher’s and Mallard and claret!
Harry Press from Manchester landed a brace of Trout on spinner from the boats, best fish tipping the scales at 2lb! Geoff Tutt from Southampton also landed a nice brace on worm from the boats!
Chris Williams also landed a brace on spinner from the boats. Meanwhile Chris Smith landed 3 again on spinning tactics from the boats!
Fishing from the bank Jack Green from Liverpool landed 3 to legered worm and last but certainly not least Tom Robertson from Manchester caught and released an estimated 15 Trout from the boathouse banking on legered worm!
Another 500 fish were stocked again yesterday so if you are planning a trip to Esthwaite, now is the time!
There are still places left for our discounted fly fishing tuition days. Dates include 29th May, 4th June and 16th July respectively. The sessions start at 10am and finish at 2pm and only cost £20 each. Participants are provided with the tackle on the day, but you will need a brimmed hat and a pair of sunglasses with you. Also don’t forget a valid EA licence! If you have not got one, then you can purchase one here on the day!
To keep up with daily activity here at the fishery, please follow us on Facebook , Twitter and Google+. To book a boat or make enquiries please telephone Dave on 015394 36541.
Best Regards
David Coleman M.I.F.M 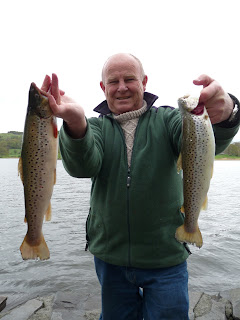