ESTHWAITE WATER TROUT FISHERY REPORT – 20/11/15
TROUT FISHING
The trout fishing has slowed down abit now, however for those that have been out and about, there have been a few caught. There are still a few buzzers and the odd sedge hatching, however coarse fish fry have been top of the Trout’s menu in recent weeks!
Johnathon Law from Preston fished cats whisker on a sinking line and landed 3 nice brown’s to 2lb+ from the boats. Meanwhile Stuart Howes from Carlisle fished zonkers on a sinking line and landed 2 nice Trout to 3lb, again from the boats.
Graham Jones from North Wales fished from the car park banking and landed a cracking 4lb+ specimen and Dave Williams from Barrow landed a nice 5 pounder on spinner from the boats!
The Trout fishing is still well worth a go with the mild weather still with us. Best areas include the ticket office frontage, Strckland Bay, Grubhole and Swimming Pool fishing best!
PIKE and COARSE FISHING
The Pike fishing is still red hot with plenty of fish succumbing to deadbaits and lures and both the bank and the boats are fishing well!
Nige Cooper had a great day out with Geoff Waites landing an 18 and a 22 pounder from Weather Bay on static deadbait. Nige also had 2 fish to 12lb on lures the week before.
Big s club member Reece Nicholson from Carlisle continues his great run of form with another twenty at 21lb 15oz from the car park banking on Herring. (see attached photo).
Meanwhile Grand Slam winner John Ashurst took a 20lb 2oz Pike on a lure first cast of the day! (see attached photo). John also had another 3 fish to 15lb the following week.
Another Big S club member Paul Mattinson from Keswick landed an 11 and a 15 pounder on trolled deadbaits. Jamie Murray landed a 19 pounder on herring from the boats. Jack Harris from Barrow landed a 15 pounder on static deadbait.
Ian Bland has landed a series of doubles in recent weeks to 15lb on lures. Anthony Bolton from Preston landed 5 fish from the boats, including 3 doubles to 15lb on lures! Mark Billington landed a 12 pounder to static dead’s!
Hawkshead Angling Club member Harry Poxon landed a 17 pounder on a Trout deadbait from the boats and last but not least Nigel Parker from Leed’s landed 8 doubles to 15lb+ over 2 days!
The general coarse fishing still remains very good with plenty of bags to 30lb+, mainly of Roach, Perch and skimmers. Best pegs at present include the point opposite the ticket office and the boathouse stretch on the Eastern bank!
Best Regards 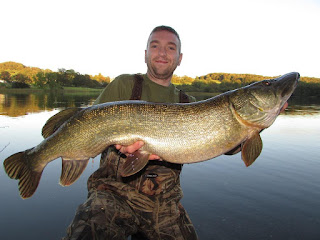 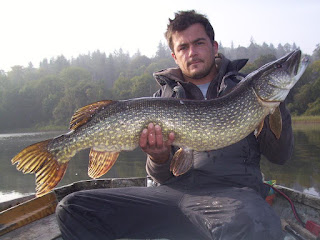 Posted by Esthwaite Water Trout Fishery at 04:13 No comments: