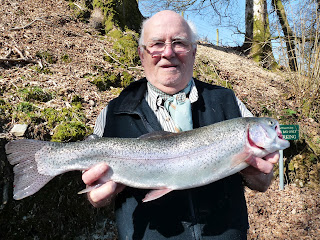 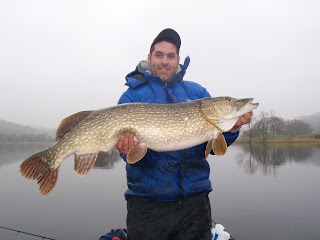 ESTHWAITE WATER TROUT FISHERY REPORT – 30/3/12
TROUT FISHING
The fantastic sport that has been experienced throughout March continues and with the warm weather for the time of year, the buzzer hatches have been immense. Rising fish has been commonplace, even in bright sunlight and overcast days have been electric for top of the water and emerger fishing. The nymph fishing has also been good, especially on days when a cool wind is blowing and there are little signs of surface activity.
Best areas include Weather Bay, Swimming Pool and the boathouse stretch in the North basin. Whereas the ticket office frontage, Strickland bay and 4 tree bay have been the hot spots in the South basin.
The superb catch returns continue to flood in. Ian Singleton and Bill Ethrington  from Barrow had a superb day in Weather Bay from the boats, taking 11 rainbows and 1 Brown Trout, all on the fly!
Season ticket holder Richard Maddox took 4 rainbows and 2 browns all on fly from the boats in the North basin. Meanwhile John Gardner took 4 rainbows on similar tactics.
Venue regular Jim Miller from Keswick fished cats whisker and Montana nymphs to record 6 rainbows to 3lb 3oz from the boats and on a subsequent visit Jim took a 4lb 8oz over wintered rainbow to similar tactics (see attached picture).
Peregrine Team Esthwaite member Adam Larbeleistier experienced a superb practice session on the lake. Fishing from a boat and employing the washing line tactics in conjunction with nymphs and buzzers fished just sub surface, Adam recorded 20+ fish!
Meanwhile Malcolm Robson a HAC member from Morecambe fished cats whisker on a slow sink line to record 10 rainbows in 2 visits to the fishery, again fishing from the boats!
The Troutmasters fish off at Esthwaite Water was won by Mike Laycock who weighed in 6 trout for a total weight of 14lb 12 oz and in second place England Youth squad member John Macintosh weighed in 6 fish for 12lb 4oz. Mike now gets to represent the fishery at the Trout Masters final to be held on Grafham Water in May. Good luck Mike, give ‘em hell!
Also the annual Chaplow’s fun match was contested last week and the day was full of the usual leg pulling and general camaraderie. The winner of the match was Phil Hawkins who weighed in his 3 trout for 5lb 5oz. In second place Ryan Morris weighed in 3 trout for 4lb 13oz and in third place Arthur Laughton weighed in 3 trout for 3lb 11oz.
PIKE FISHING
The warm weather has slowed the Pike fishing some what as they get ready for spawning, however resident Esthwaite guide Alex Barton took a fine conditioned 26 pounder which fell to a lure in the car park area of the lake ( see attached picture ).
Also another guided trip ended in Mrs Jane Shirley from Bedfordshire who took a fine brace of Pike with Esthwaite guide Dave Coleman. Jane landed a 16 pounder on a lure and followed this up with a mint 23 pounder on deadbait to finish off.
The Pike season here on Esthwaite is closed after the end of March and will resume on October 1st. Anyone interested in fishing the venue for the 2012/13 winter season should contact the fishery on 015394 36541 or email us at trout@hawkshead.demon.co.uk.
Best Regards
David Coleman M.I.F.M
FISHERY MANAGER
Posted by Esthwaite Water Trout Fishery at 04:19 No comments: 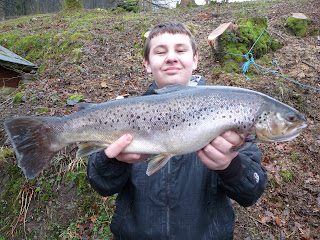 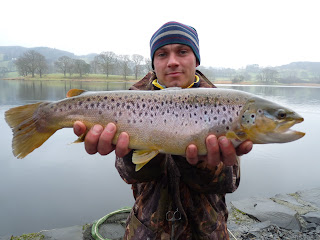 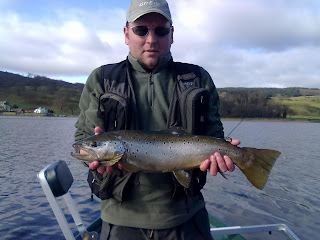 ESTHWAITE WATER TROUT FISHERY REPORT – 15/3/2012
TROUT FISHING
What a fantastic start to the season we have had here at Esthwaite, with many good reports of double figure bags, and all methods producing the fish and some spring like weather to cap it all off, can’t be bad! The lake received its first stocking on the 1st March and right from the word go, the fishing was excellent. Hawkshead Angling Club member Jamie Timmins enjoyed an epic session, landing 30+ trout from the ticket office banking, mostly Rainbows on worm and spinning tactics, however he accounted for a beautiful over wintered specimen Brown Trout of 4lb+, which was released safely (see attached picture). Also bank fishing David Telford from Bootle landed 8 rainbows to 2lb+ on legered worm. Cameron Johnson aged 13 from Leigh in Lancashire fished worm and sweetcorn from the car park and took another over wintered Brown Trout of 5lb (see attached photo). Meanwhile season ticket holder Joe Reynolds from Barrow landed 8 rainbows on spinning tactics. Mike Japp from Blackpool also fished the spinner and landed a rainbow of 4lb 6oz.
Fly anglers have also been doing well. Richard Maddox from Barrow boat fished the North basin and took 5 rainbows on sinking line and appetiser lures. Fishing similar tactics John Gardner from Morecambe also took 5 rainbows on cats whiskers and orange fritz combo’s.
While practicing for the open pairs heat, HAC member Bob Swann took 20 rainbows from the boats over 2 days. Bob employed a variety of lures and nymphs on a sinking line. Meanwhile Jon Henderson, also on a practice day landed 12 rainbows and a 10lb Pike on similar tactics!
Bill Hethrington, a season ticket holder from Barrow landed 5 rainbows while fishing from the boats. All Bill’s fish were taken on cats whisker and orange fritz, fished on a sinking line. Also Ian Ferguson from Brampton took 8 rainbows to 2lb+ on Dawsons olive’s fished from the boats!
Stephen Fletcher from Consett boat fished the North basin and landed another grown on Brown Trout which was safely returned and must have been 5lb+ (see attached picture). Stephen caught the brownie on fly and landed 4 other rainbows too.
The Peregrine team Esthwaite lads fished the venue last weekend and landed 26 rainbows and 2 brownies between them. All of them boat fished and took fish on early season favourites such as black and green damsels and  boobies fished in conjunction with sinking lines!
Our open day on Sunday 11th March was a blast. Heat 1 of the 2012 Open Pairs competition was contested with 16 anglers landing 64 rainbows for a total weight of 109lb 1oz. In second place Bob Swann and Colin O’brien weighed in 12 fish for 22lb 2oz and in first place Mike Frith and Mike Henshall weighed in 12 fish for 23lb 6oz, including the time bonus. Both pairs now go through to the final in September. Also on open day James Atkinson and John Macintosh from the England Youth Flyfishing team conducted a fantastic fly tying demonstration which kept everybody amused in the tackle shop. Our discounted fly fishing tuition session was well attended with our resident instructor Ian Jones giving participants all the help they needed to get started. There were many people who just popped down for the craic and the camaraderie was fantastic, as was the weather which stayed mild and spring like for a change!
For all the latest information log onto our website www.hawksheadtrout.com or follow us on Facebook and Twitter!
Best Regards
David Coleman M.I.F.M
FISHERY MANAGER
Posted by Esthwaite Water Trout Fishery at 06:02 No comments: