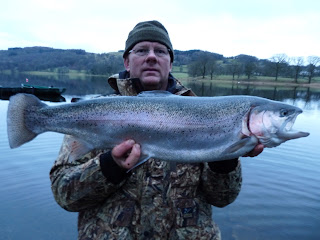 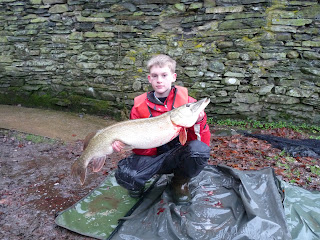 ESTHWAITE WATER TROUT FISHERY REPORT – 2/1/12
TROUT FISHING
First and foremost, Happy New year to all our contacts, whether they be customers or angling writers, we hope you have a fantastic 2013 season here on Esthwaite Water, tightline’s to all!
The mild weather over the festive period has provided good winter conditions and the fish have been active throughout. Bank anglers have been doing very well off the ticket office frontage. Hawkshead Angling Club member Dave Bell fished legered worm and caught and released a nice brace of brownies, the best about 2lb.
Meanwhile Paul Thornber and Andrew Dawson from Burnley fished spinners from the ticket office banking catching and releasing 4 nice Brown Trout. The pair took a 6lb 4oz, a 7lb 1oz, a 7lb 4oz and a 7lb 8oz fish. The winter fishing off the ticket office is fantastic  as the shoals of fry congregate around the structure provided by the ticket office and the boat jetty. I am sure who ever fishes off here in the next few weeks will do well, weather permitting!
Colin Murray from Preesal in Lancashire had a day to remember on the boats. Employing Rapala’s. Colin took a fabulous brace of double figure fish in the shape of an 11lb Brown Trout and a 13lb 8oz Rainbow. Wow what a day! (see attached photo)
Mark Billington from Sedbergh also had a 5lb Brown Trout and a 3lb Rainbow Trout taken on static deadbait from the boats. Both fish were safely released.

PIKE FISHING
There have been several Christmas crackers out recently! Big s club member Steve Hinks from Blackpool took a 22lb 10oz Pike while fishing deadbait from the the boats. Also another Big s club member Chris Harris landed a 24lb and a 14lb fish. Both fish were taken from the boats.
Also fishing from the boats Barry Brookes took a 19lb 8oz Pike and a 5lb Rainbow on static deadbait.
Another Big s member John Ashurst from Wigan used a combination of lures and deadbait from the boats to take fish of 4lb and 17lb respectively.
Meanwhile bank fisherman Markus Rungeling from Blackpool took a nice 23lb specimen whilst bank fishing with sardine deadbait.
Also venue regular Fonz Howard took a 14lb 2oz and 25lb 14oz specimen from the banking in the North basin.
Last but not least James Macdonald aged 15 from Garstang bank fished next to the ticket office with Lamprey section and got his best Christmas present ever in the shape of a 19lb 2oz specimen.(see attached photo)
For all the up to date information please telephone the ticket office on 015394 36541 or find and follow us on Facebook and Twitter!
Best Regards
David Coleman M.I.F.M
FISHERY MANAGER
Posted by Esthwaite Water Trout Fishery at 02:58 No comments: