ESTHWAITE WATER TROUT FISHERY REPORT – 21/6/11
An algal bloom has provided some tough conditions lately, especially for the fly anglers. Worm fishing is by far the best method at present and spinning tactics are also producing the fish. The fish have been gorging themselves on daphnia and have been tricky to locate. Fishing deep with cats whiskers and blobs have been the most productive method, however some days, intermediates and slow sinkers have been finding the fish. Best areas at present include the weather buoy and grubhole in the North basin. Meanwhile Strickland bay and the cages fishing best in the South basin, especially in front of the ticket office! Top of the water fishing has been restricted to either end of the day. Hatches of buzzer and sedges have been good, but you really need to be out very early or late to experience any sort of surface feeding.
Season ticket holder Richard Maddox has taken 14 fish in 3 visits from the boats. Richard took a combination of Rainbow’s and Brown’s to 4lb+ on cats whiskers and sinking line tactics. [ see attached picture ]
Also season rod John Gardner took 2 Brown’s and a Rainbow on cats whiskers and ’s from the boats! Meanwhile Bill Hethrington took 3 fish to 3lb + on the fly from the weather buoy.
Worm anglers are experiencing the best sport at present with Greg Parkinson from taking 7 cracking fish to 4lb+ . Greg and his party of lads took all there fish from the boats on float fished worm!
Visiting anglers John Ellwood and Andy Franklin from fished from the boats and took 4 rainbow’s to 4lb 2oz, again on the worm!
Star of the show this week however was young Lois Richardson , aged 5 from who took his first fish ever in the form of a 3lb rainbow from the ticket office banking on float fished worm. The youngster was over the moon and has persuaded his granddad to bring him again this weekend. Well done Lois, a cracker for your first fish! [ see attached picture ].
Heat 5 of the Masterline Walker and Pure Fishing sponsored Open Pairs competition was contested last weekend. In second place Peter Moore and Paul Wyatt weighed in 1 rainbow for 2lb and in first place John Henshall and Mike Laycock weighed in 1 rainbow for 2lb 6oz. Both pairs now go through to the final to be held on the 25th September. Heat 6 will be held on Saturday 9th July, anyone wishing to fish the last heat should contact the ticket office on 015394 36541. Full details will be sent out with entry forms!
There are places left on the discounted tuition day on Sunday 10th July. Anyone interested should contact the ticket office to book your place. The price is £10 for each participant.
There are still a couple of places left in Hawkshead Angling Club, which now has NO geographical boundaries. The club is restricted to 100 members, so be quick to telephone the secretary Emma Macintosh on 015394 36116 or email alex@garishglobes.co.uk. If you would like to join but not until 2012, let her know and you will be put on the waiting list and contacted in the new year!
Best Regards
David Coleman M.I.F.M
FISHERY MANAGER
Posted by Esthwaite Water Trout Fishery at 07:55 No comments:

ESTHWAITE WATER TROUT FISHERY REPORT – 7/6/11
What a mixed bag of  weather we have experienced over the last couple of weeks. Ten degree air temperatures on many days and chilly winds and then a miniature heat wave at the back end of last week with temperatures pushing 28 degrees for a day or  two. The unsettled weather  has had its effects  on the fishing with catches being up and down, with some quiet days and then some very productive days indeed! Hatches have been inhibited by the cooler weather, however when the  mild/ warm conditions prevailed good hatches of buzzer’s, olives, damsels and alders have been coming off in numbers. Also terrestrials such as daddies, hawthorns and beetles have been numerous. The coarse fish fry are shoaling now in numbers, adding to the veritable larder that the trout have at this time of year.
Best recent catches, include season ticket angler Richard Maddox who took 12 rainbow’s and 2 brownies to 4lb+. All Richard’s fish fell to an orange fritz goldhead fished from the boats. Also Jim Miller took 45 fish in 3 visits including  brown’s and rainbow’s to 4lb+. Again all Jim.s fish were taken from the boats with a Di-3 line and cats whisker, blob and diawl bach combinations!
Raymond Fisher took 6 fish , again from the boats on a sinking line and lure combo. Meanwhile England Youth squad member John Macintosh took a brace of rainbows to 3lb 12oz [ see attached picture ], fishing Di-7 and a booby. Eric Brown from Cockermouth also took a cracking ‘bow of 3lb 8oz!
Worm and spin anglers have also been catching some cracking fish with Dr Fayyaz Musa from Huddersfield fishing a  worm from the boats to record 4 rainbows, biggest a 4lb 10oz beauty [ see attached photo ].
Half term saw the  kids back at Esthwaite Water. Making the most of their holidays and having a whale of  a time with some super catches reported. James Liu [13], Joe Kay [13], Lottie Basterble [8], and Lilly Basterble [9], from , all caught fish with the supervision of the  fisheries staff, from the ticket office banking and all using worms for bait! [ see attached photo ].
Last weekend saw heat 4 of the 2011 Masterline Walker and Pure Fishing sponsored Open Pairs competition take place and 14 anglers weighed in 13 rainbows for a total weight of 31lb 12oz. In second place Ben Bayliss and Adam Larbaleistier weighed in 2 rainbows for 6lb 14oz. In first place Jon Turner and Brian Shields weighed in 5 rainbow’s for a total weight of 11lb 9oz. Both pairs now qualify for the final in  September and both pairs represent the fishery at national level as part of Peregrine team Esthwaite. Well done lads, good luck for the final! The next heat is on Saturday June 18th. Please telephone or email to book a place and receive entry forms and a set of rules!
The discounted tuition days still have places available. There are still places left on the FREE juniors day on Sunday 12th June. Also there are places left on 25th June and 10th July. Please contact the fishery to book your place!
Best Regards
David Coleman M.I.F.M
FISHERY MANAGER 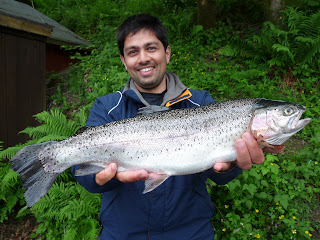 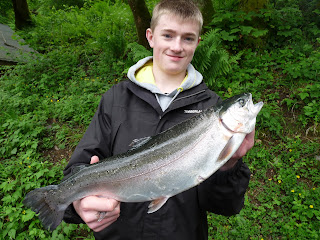 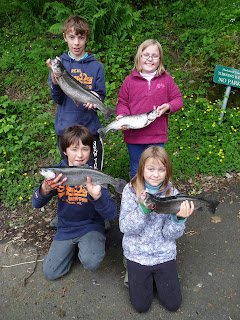 Posted by Esthwaite Water Trout Fishery at 04:48 No comments: