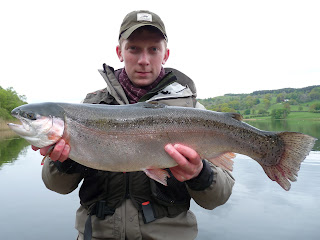 The hot weather has slowed sport some what, however there has been some outstanding catches reported nevertheless with successful anglers fishing early mornings and evenings for the most consistent sport. Fly life has been phenomenal with big hatches of buzzer, alders, olives and damsels. There have also been good falls of hawthorn and daddy log legs which have kept fish feeding high in the water and anglers have found that the imitative approach has been the most successful.
Before the start of the hot weather England Youth star Carl Malpass and boat partner seasoned veteran Tom Nelson, both from Consett in Co Durham lost count of the numbers of fish they had to the boat fishing buzzers on a floating line set up. Carl took the best fish of the day and what a fish it was too, a 9lb 12oz beauty (see attached photo ).
Also fishing imitative patterns Malcolm Robson from Morecambe, a Hawkshead Angling Club member took 5 rainbows from the boats on static nymph tactics fishing on a floating line!
Meanwhile visiting anglers from North Wales, John and Rhian Robinson who boat fished the venue and employed buzzers and sedges on floating lines took a total of 62 rainbows and browns over 3 days!
Also doing well with the imitative approach John Morgan Parker fished buzzers on a washing line set up to record 28 trout while fishing from the boats.
The season ticket anglers have also done well with Richard Maddox latching into 23 fish, John Gardner landed 18 trout and Jim Miller 17 trout to the boat fishing cats whiskers and damsels! Also Joe Reynolds employed worm and spinning tactics to take12 trout over 2 visits fishing again from the boats.
Tony Price from Wasdale fished fry patterns on a sinking line from the boats and took his limit bag of 4 fish to 3lb+. Meanwhile Anthony Hutchinson fished small black flies, just under the surface and was rewarded with 3 cracking rainbows fishing from the banking.

Just 6oz separated the top three anglers in the inaugural Esthwaite Water Individual Competition 2012 which was contested recently. This all new boat/fly competition which is open to all fly anglers saw 23 anglers weigh in 87 trout for 127lb 5oz.

The next discounted tuition day is to be held on Saturday 16th June, anyone wishing to book in for this event should contact the fishery ticket office to book in. The cost of this not to be missed event is only £10 and all that participants need with them is a hat and pair of sunglasses and a current EA licence!
Best Regards
David Coleman M.I.F.M
FISHERY MANAGER
Posted by Esthwaite Water Trout Fishery at 03:08 No comments: 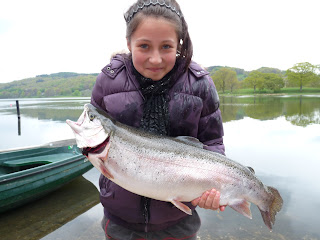 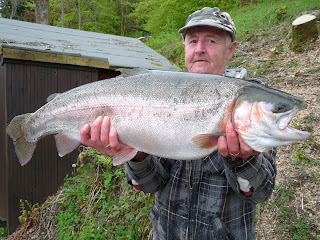 The cold northerly weather systems have been with us for weeks now and although it has been unpleasant on the lake some days, the water temperature has remained constant and the fishing as a result has been fantastic. Hatches of buzzers, alders, olives and sedges have been prolific, especially on warmer days and the fish have been up in the water and very obliging. Imitative techniques have reigned supreme of late and damsels fished on an intermediate line as well as buzzers and nymphs fished on floaters have been the most successful approach.
Indeed two anglers that have reaped the rewards of employing these methods were Peregrine Team Esthwaite members Adam Larbelestier and Ben Bayliss who boat fished the venue and took 22 fish to 6lb 8oz. Hot patterns for the duo were general nymph patterns, damsels, dabblers and bumbles.
The season ticket anglers are also doing well. Bill Shortall from Southport fished beetle imitation dries on a floating line and over 2 visits took 14 fish from the boats. Bill’s best fish was a grown on 6lb Brown Trout. Richard Maddox from Barrow in Furness took 21 fish on damsels and cats whisker’s,over 2 visits, again from the boats. Meanwhile Jim Miller from Keswick took 14 brown’s and rainbows over 2 visits, from the boats on a combination of damsels, cats whiskers and diawl bachs. Also John Gardner took 8 fish from the boats on an intermediate line and an olive cats whisker.
Any method anglers have also been getting in on the great sport experienced of late. David Pennington from Blackpool bank fished with worm in Stockie bay and took a cracking  rainbow of 12lb 14oz (see attached photo of Lisa, his daughter).
Meanwhile David Wareing from Wigan bank fished the car park and took another lump of 12lb 4oz on legered sweetcorn (see attached photo).
Hawkshead Angling club members Wendy and Dave Telford have also been encountering great sport from the banking, fishing legered and float fished worm and have landed good numbers of fish, with the best fish falling to Dave’s rod at 7lb 8oz. Wendy’s best fish tipped the scales at 6lb!
Heat 3 of the Esthwaite Water Open Pairs Competition 2012 was contested last week with 14 anglers weighing in 66 trout for a total weight of 90lb 4oz, including time bonuses. In second place England Youth members John Macintosh and James Atkinson  weighed in 12 fish for 18lb 1oz, including time bonus and in first place England senior members Alistair Beaumont and Dave Morris weighed in 12 fish for 19lb 13oz, including time bonuses. Both pairs now go through to the final in September. For those that want to fish the next heat which takes place on Saturday 16th June, please contact the fishery for more details!
Also there is a new individual boat, fly fishing competition taking place this weekend, Sunday 20th May. The competition will be fished to Esthwaite Water competition rules. It is a friendly event and there are some fantastic prizes up for grabs. Please contact the fishery A.S.A.P for further details as we still have a few boats available!
Also our next discounted tuition day will take place on Saturday 26th May. If you fancy learning to fly fish then this is an opportunity not to be missed. The session start at 10am and finishes at 2pm. The cost is £10 per person. All you need is a current EA licence and a brimmed hat and sunglasses for protection!
Best Regards
David Coleman M.I.F.M
FISHERY MANAGER
Posted by Esthwaite Water Trout Fishery at 06:48 No comments: 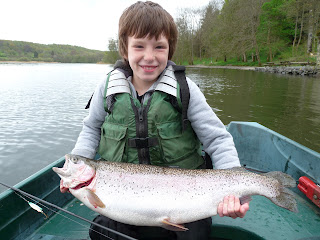 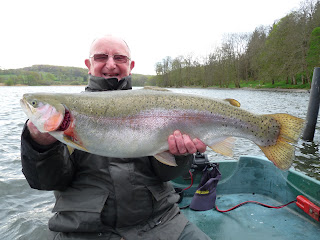 Despite the continuous unsettled weather patterns from the North East, keeping the temperatures down, the fishery has been on top form once again and the imitative fishing has been superb with fish very much up in the water. Although hatches have been restricted good numbers of buzzer, olives and alders have been coming off the water keeping the fish near the surface and feeding with gusto!
Being regular visitors to the fishery the season ticket rods have been having a ball. Over 3 visits Richard Maddox from Barrow in Furness has landed 41 trout on fly from the boats. Richard opted to fish an intermediate line and damsels to take his huge haul of fish, which was topped by his personal best rainbow of 11lb 12oz (see attached photo).
Jim Miller, another season rod from nearby Keswick has taken 28 trout over 3 visits on similar tactics. Meanwhile John Gardner from Morecambe has caught 24 trout over 2 visits. John also employed an intermediate with cats whisker and damsel combos’.
Also doing well on the fly Stephen Emerson and Tony Averill from Kelso landed 20+ rainbows and browns fishing buzzer and Montana on a floating line from the boats.
John Battersby from Freckleton fished from the boats and landed 8 trout to 2lb+ on the fly. Meanwhile Bob Swann fished dabblers on a fast glass intermediate and took 12 rainbows.
Hawkshead Angling Club member Thomas Morris from Whithaven fished a washing line set up on a floating line with a midge tip and took 16 rainbows to 2lb 8oz. Buzzer was the killing pattern fished from the boats!
Any method anglers are also doing well from the boats and the bank and Matt Hunt aged 9 from Warrington took a fabulous rainbow of 12lb 10oz from the South basin on spinner, while fishing with his dad Dave, well done son! (see attached photo)
Heat 2 of the 2012 Esthwaite Water Trout Fishery Open Pairs competition was contested last weekend and qualifying for the final was the top 2 pairs. In second place Barry Brookes and Paul Bland weighed in 12 trout for 16lb including time bonus. Meanwhile in first place Ernie Craster and Peter Crowe weighed in 12 trout for 16lb 5oz, in what was to prove a very close heat indeed. The next heat of this great competition will take place on Saturday 12th May. Please contact the fishery to book your place!
The Esthwaite Water 2012 Tackle Shop Challenge match was contested last week. Six tackle shops from the North West area competed in this light hearted competition and the winners once again for the second year running were The Northwest Angling Centre in Wigan. Proprietor Dave Hunt and angling partner Scott Graham weighed in a brace of fish weighing 8lb 10oz. Well done to those two, obviously an effective partnership!
Anyone wishing to fish the Esthwaite Water Individual Competition to be contested on Sunday 20th May should contact the fishery immediately for registration. This new boat fly competition will be a friendly individuals competition and will be fished to Esthwaite Water competition rules. There are some great prizes up for grabs in what promises to be a fantastic new loch style comp’. Entry fee is £32.50 per person and boat allocation will take place on the day. Anyone is welcome!
The next discounted tuition day will take place on Sunday 13th May, there are still places left for this event, so please contact the fishery A.S.A.P if you would like to learn to fly fish or just brush up on your existing technique and the cost is £10 per person!
Best Regards
David Coleman M.I.F.M
FISHERY MANAGER
Posted by Esthwaite Water Trout Fishery at 04:32 No comments: