The challenging fishing continues here at Esthwaite Water with anglers struggling to find any consistency. There is a myriad of natural food in lake at this time of year and this is not helping when it comes to fly or bait choice or which areas are more productive than others. Stockie bay is surprisingly still holding fish, however the lack of warm weather has ensured water temperatures are fairly low for the time of year, however the fish are being taken in no more than 6-8 feet, whereas the weather buoys are starting to fish more consistently which is expected and some fish are feeding down at 12-15 feet and are hard on the daphnia. The fish are also hacking into the coarse fish fry and there is any amount of surface activity in the mornings and evening as fish take advantage of the buzzer and sedge hatches. Hatches of damsels are also commonplace at present!
One angler that fished an evening session with dry beetle patterns, encountered the fish in an obliging mood was England Youth member Jon Macintosh from nearby Hawkshead. Jon fished in Stockie bay from the boats and was rewarded with 5 rainbows to 2lb+.
Season ticket angler Jim Miller has also been employing fly tactics from the boats and has taken 13 trout in 4 visits, mainly on a combination of fry patterns and general nymph patterns, fished on an intermediate line set up.
Richard Maddox fished fly and spinner from the boats and landed 3 Brown Trout from the boats.
Any method anglers are experiencing the bulk of the action at present and reports are coming in from both boat and bank. Indeed Pat Newman from Wigan fished the area next to the ticket office and landed 3 rainbows to 2lb+ on worm!
Meanwhile out in the boats Alistair Mcharrie from London took 7 browns and rainbows on spinner! Shaun Peacock from Preston also experienced similar sport, taking 8 trout to 2lb on spinner from the boats. Also Byron Timmer from Gloucestershire also took 3 trout on similar tactics!
Heat 6 of the Esthwaite Water Pairs Competition took place last weekend and the qualifying pairs for this years final was Graeme Bell and Jim Tuck who won the heat , followed closely in second place by Jason and Richard Ruff. Both pairs now go through to the final, to be held on Sunday 9th September! 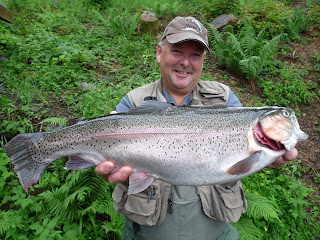 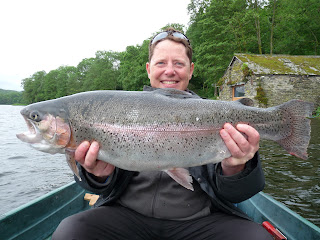 ESTHWAITE WATER TROUT FISHERY REPORT – 5/7/12
The recent fishing on Esthwaite has once again been challenging, however despite this fact, a number of good catches have been reported from both boat and bank and also on a variety of methods! The fly life and hatches on the lake have been prolific as you would expect for this time of year and this years coarse fish fry have been high on the menu too, however a brief algal bloom last week has encouraged the daphnia to replicate and this usually keeps the fish off the surface and provides the usual head scratching as anglers seek the deeper water and the tricky exercise of finding the feeding depth of the fish. One place that has been consistent with the poor weather that we have experienced this season, is Stockie Bay and The Car Park area of the lake and fish are still feeding on buzzer, sedges and damsels that are coming off the lake. Even these fish have been abit twitchy and a careful approach and the right fly choice have been critical to experience consistent sport!
The West Midlands Police fished from the boats last week and the majority of anglers caught good numbers of fish, however pick of the bunch was seasoned angler Steve Owen who fished a damsel on a floating line to take a dozen fish over the two days to 7lb 5oz  (see attached photo ).
Meanwhile visiting angler Gerben Hulskens from Holland took 5 rainbows to 2lb+ fishing general nymph patterns on an intermediate line.
Season ticket angler Richard Maddox took 3 Brown Trout and 2 rainbows over 2 visits on a combination of spinner and fly. Jim Miller has had 7 fish over 2 visits on cats whisker and damsels and John Gardner has taken 7 in 1 visit.
Any method anglers have been getting in on the action too as Alistair Mcharrie from London proved with 7 trout all taken on spinner from the boats. Meanwhile Shaun Peacock from Preston has taken 8 trout, again on spinner from the boats.
Best recent fish was taken by Season ticket angler Simon Walsh from Wigan. Simon fished worm in Stockie bay and was only out fishing for 1 hour when he hooked into a lump of a rainbow at 12lb 9oz ( see attached photo ).
Heat 5 of the Esthwaite Open Pairs competition was contested last weekend with 10 anglers (5 pairs) weighing in 29 trout for a total weight of 32lb 4oz. In second place Graham Barton and Mick Taylor weighed in 10 trout for 9lb 7oz and in first place Mike Laycock and John Henshall who weighed in 12 trout for a total weight of 13lb 12oz. Both pairs now go through to the final on Sunday September 9th. Well done to both pairs!
The last heat of this years pairs competition takes place on Saturday 14th July. Anyone who wishes to enter should contact the fishery as soon as, to book their place!
Also on Saturday the 14th July we have the last discounted tuition day of 2012. There are still places left for the day and remember this is a 4 hour fly fishing tuition session costs just £10 each. All participants need to bring with them is a current EA licence and a brimmed hat and glasses for protection. Please contact the ticket office on 015394 36541 to reserve your place.
Best Regards
David Coleman M.I.F.M
FISHERY MANAGER
Posted by Esthwaite Water Trout Fishery at 08:41 No comments: