ESTHWAITE WATER TROUT FISHERY REPORT – 20/7/11
Cooler, wet weather has improved the fishing no end. The lake is clearing well now and fish are up in the water once more. Early mornings and late evening time has seen the fish feeding hard at the surface, where hatches of olive buzzer’s, sedges and damsels have been extensive. However during the day, be prepared to fish deep again, especially if the sun comes out. Pulling tactics will score heavily on fast sinking lines, in conjunction will flies such as cats whisker’s, blobs and boobies! Finding the depth is critical when targeting the daphnia feeders!
One angler who has been very successful fishing early mornings is John Gardner from Morecambe. Over 3 visits John has fished from the boats in the North basin and taken 14 rainbows and browns to 3lb+. John fished from the boats and took all his fish on an intermediate line and gold head lime green lure. John also took a few fish deep on worm, when the fish disappeared from the surface! Good angling!
Jim ‘Dusty’ Miller is also getting into the fish taking 12 rainbows and browns, again to 3lb+, over 2 visits. Jim also took all his fish from the boats and on similar tactics to John. However all Jim’s fish were taken in the top 6 feet of water.
Visiting angler James Day from Northamptonshire, fished around the weather buoy in the North basin and took 4 rainbow’s to 4lb+ from the boats. James employed a Di-5 line and cats whisker combination!
Also visiting from Italy Federico Buccelli and Giampaolo Grimaldi took 5 rainbows between them. All the fish were taken on worm and all in the 2-3lb range, fishing 20 feet down from the boats.
Best bank fishing is off the point opposite the ticket office or the boat house stretch on the eastern bank. Indeed Stuart Law from Bala in fished sliding float and worm off the opposite point and took 7 rainbow’s and 1 brownie. The best rainbow tipped the scales at 5lb 2oz!
The children are starting to break up from school and have been fishing with their usual enthusiasm. There has been some very nice fish taken too! James Hyde and Jamie wood from , fished around the cages area and deep water fishing 15 – 20 feet down with worm to take these 3 crackers [ see attached photo ].
Also Matthew Whitehead, 8 years old from fished similar tactics to  take this cracking rainbow. [ see attached photo ].
However star of the  show was 3 ¾ year old Joe Tansey, who took his first ever trout, while fishing with his dad. The fish was again on worm from the boats. Look at his face – hooked for life! [ see attached photo ]
Heat 6 of the Masterline Walker and Pure Fishing sponsored Esthwaite Water Open Pairs competition was contested last week. Four pairs fished the heat and two qualified for the final to be held on Sunday 25th September. In second place Bob Swann and Colin O’brien weighed in 3 rainbows for 6lb 10oz. In first place the reigning pairs champions from 2010, Peter Crowe and Ernie Craster weighed in 5 rainbows for 11lb 15oz. Well done to both pairs. Peter and Ernie certainly had it cracked that day, marking off 20 feet of line and fishing deep with cats whiskers. They took 5 solid fish to earn their place, once again in the grand final!
For up to the minute information telephone 015394 36541. For all other information log onto www.hawksheadtrout.com
Best Regards
David Coleman M.I.F.M – Fishery manager 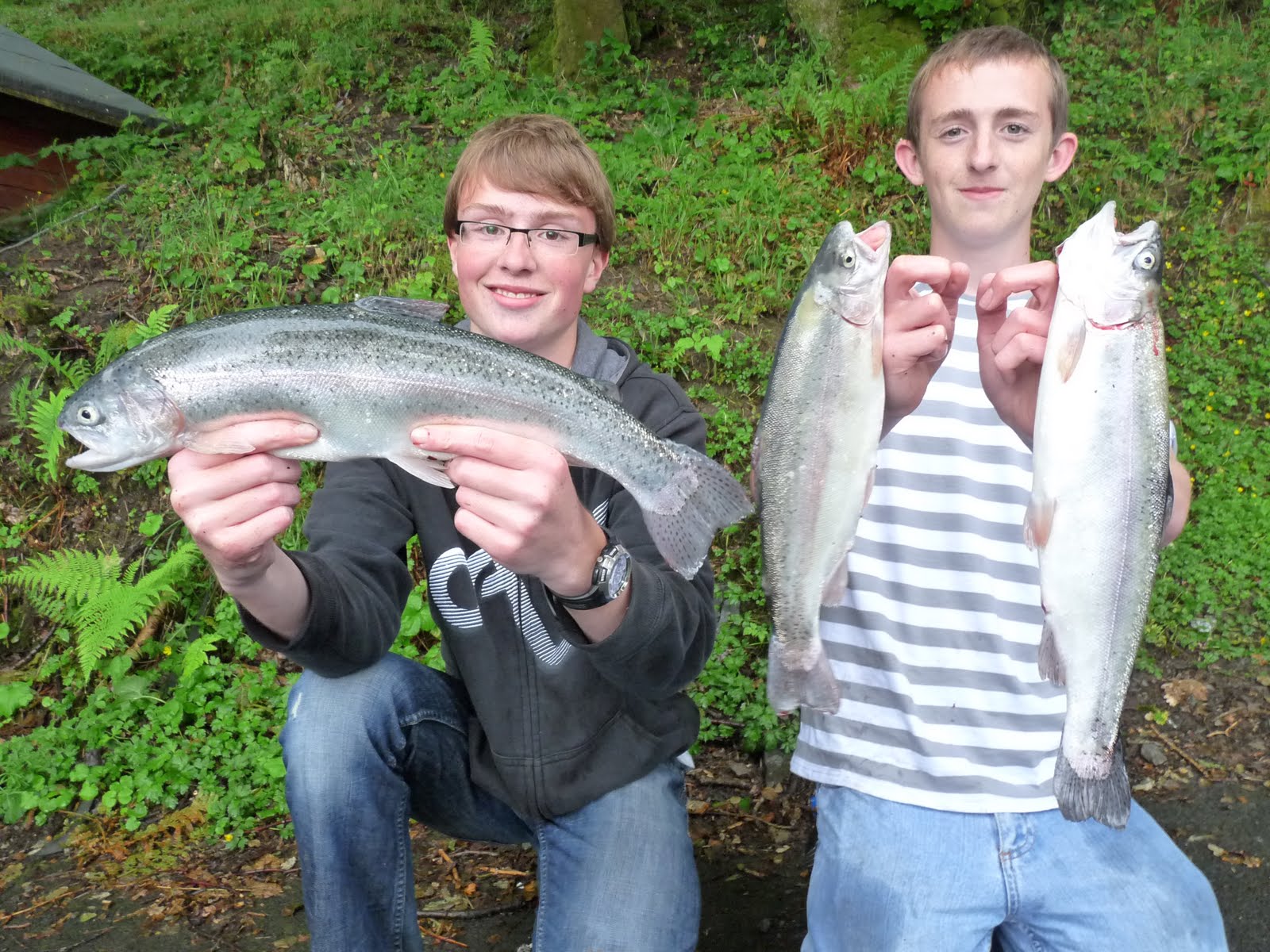 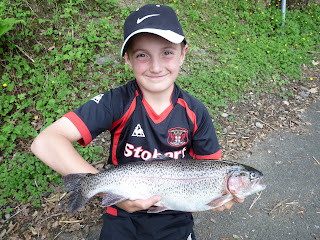 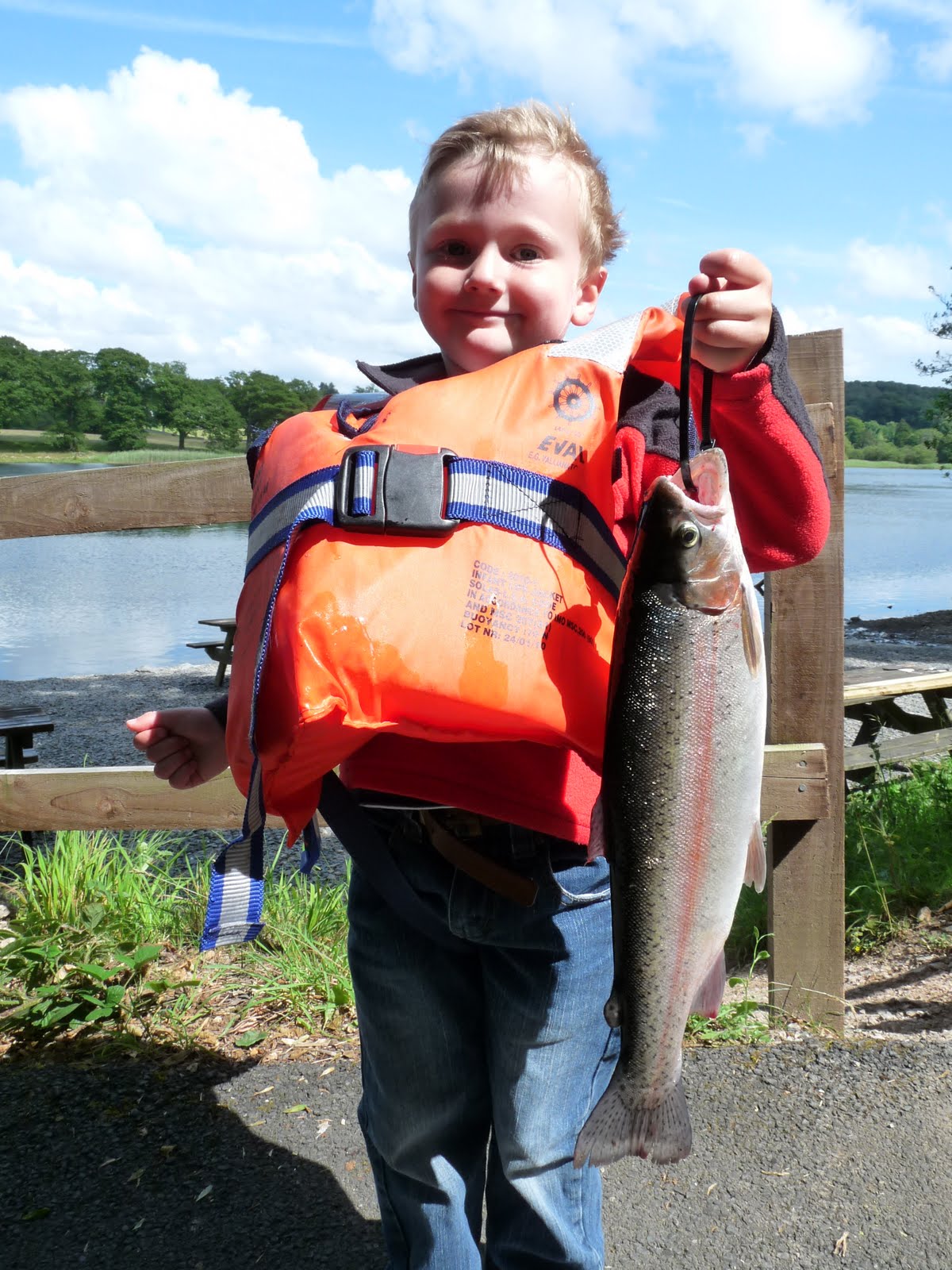 Posted by Esthwaite Water Trout Fishery at 09:42 No comments:

ESTHWAITE WATER TROUT FISHERY REPORT – 8/7/11
The water clarity is gradually clearing and sport is improving no end, however the fish remain deep, very deep and are still feeding on the daphnia blooms. The fly anglers are finding it tricky, with Di-7’s and Di-8’s fished in conjunction with lures such as cats whiskers and blobs from the boats, that are encountering the best sport. Early starters and late finishers are encountering some brief windows of surface action as fish come up for hatches of buzzer and sedges. Worm fished 20-25 feet down though is by far the most productive method at present, with some superb sport reported, especially from the boat fisherman.
Indeed Gavin and Neil Tomaselli from the North East took 4 cracking rainbows to 3lb on deep fished worm from the boats [ see attached photo ].
Also fishing the same method season ticket angler John Gardner from Morecambe took 8 rainbows to 4lb+ , again from the boats.
from Windermere experienced a hectic session, catching 9 rainbows to worm fished at 25 feet depth from the boats.
Also fishing the same deadly method, from the boats, season ticket holder Richard Maddox took 6 rainbows to 3lb 8oz.
Meanwhile Jonathon Higgins from Stourbridge fished boobies on a fast sink line from the boats to take 3 rainbows to 4lb+ and a 2lb brownie.
The last heat qualifier of the open pairs is to be fished on Saturday 9th July. Anyone wishing to fish the heat should contact the fishery to book a place. The entry fee is £35 per angler and the sponsors Masterline Walker and Shakespeare are giving away a Rovex reel case worth £19.99 to each contestant, so don’t miss out !
The last discounted tuition day also takes place this weekend Sunday 10th July , however it is fully booked. However if there are  any groups of 6 anglers that want  to participate in an additional tuition session, please contact the fishery and a separate day can be arranged.
Hawkshead Angling Club still have a few places left for the 2011 season . The club which is affiliated to Esthwaite Water Trout Fishery charges £135 for adults and £31 for juniors. Once you are a member you qualify for a 60% discount on boat prices at the fishery ticket office. If you would like to join but not until 2012 then please phone Emma Macintosh on 015394 36116 or email alex@garishglobes.co.uk and put your name down on the waiting list!
For the very latest information on the fishing telephone the ticket office on 01539436541.
Best Regards
David Coleman M.I.F.M
FISHERY MANAGER
Posted by Esthwaite Water Trout Fishery at 05:02 No comments: