ESTHWAITE WATER TROUT FISHERY REPORT – 12/6/14
Plenty of hatches now the weather’s warmed. Buzzer’s, alder’s, olives and damsels all coming off the water. Loads of daddies and bracken clocks getting blown onto the water too. Best surface action is in the mornings and late evenings. During the daytime the fish have been predictably disappearing into the depths to feed on the plentiful supply of daphnia. So for the fly angler a switch of line and tactics will pay dividends, to keep you catching throughout the day!
One angler that enjoyed a fabulous day on the boats was John Peart from Durham. John took 3 browns off the top on klinkhammer patterns , switched to a sinking line and sparkler combo’ and landed another 4 from down deep. All John’s fish were taken around the weather buoys. Simon James also had a cracking day on the fly taking 6 fish to 3lb+.
Worm anglers have been doing the best of late, fishing deep from the boats. Bryan Gray from Carlisle took 3 brownies fishing at 20 feet down around the weather buoys. Meanwhile Jim Bishop from Cheshire took 5 fish again fished deep from the boats. William Voller aged 9 from Essex managed 5 fish on similar tactics and Simon Kenner from Kendal managed 15 Brown Trout in one session on legered worm from the bank!
Best recent fish reported was an 8lb fully finned over wintered  Rainbow Trout caught on legered corn from the bank. This was a nice surprise catch for Simon Kavanagh from Dublin. Nice fish, well done that man!
We still have a few places left for the discounted tuition days on the 21st June, 6th July and the 19th July respectively. These taster fly fishing sessions cost just £10 and all you need with you is a current EA licence, a brimmed hat and a pair of sunglasses, however pre booking is essential. To book your place please telephone Dave or Alex on 015394 36541.
The Pike fishing season started early on 1st June and there have been plenty of fish reported. Indeed Shaun Whittaker from Horesham took plenty of jacks, a 12 pounder and a 19 pounder  to round off another successful visit to the fishery.Steve Hinks and Darren Lord from Blackpool also landed 4 doubles to 15lb. Heath Taylor took to the boats and landed 4 to upper doubles. Also venue regular Chris Harris from Burnley trolled his lures from the boats and landed a jack, two doubles and a cracking fish of 28lb 2oz (see attached photo). The Pike fishing is now open to anglers, however it must be stressed that permitted methods are by fly and lure only.
For regular updates please follow us on our Facebook and Twitter pages. Posts are almost daily and they are a fabulous way of keeping in tune with what’s going on, tightlines!
Best Regards
David Coleman M.I.F.M 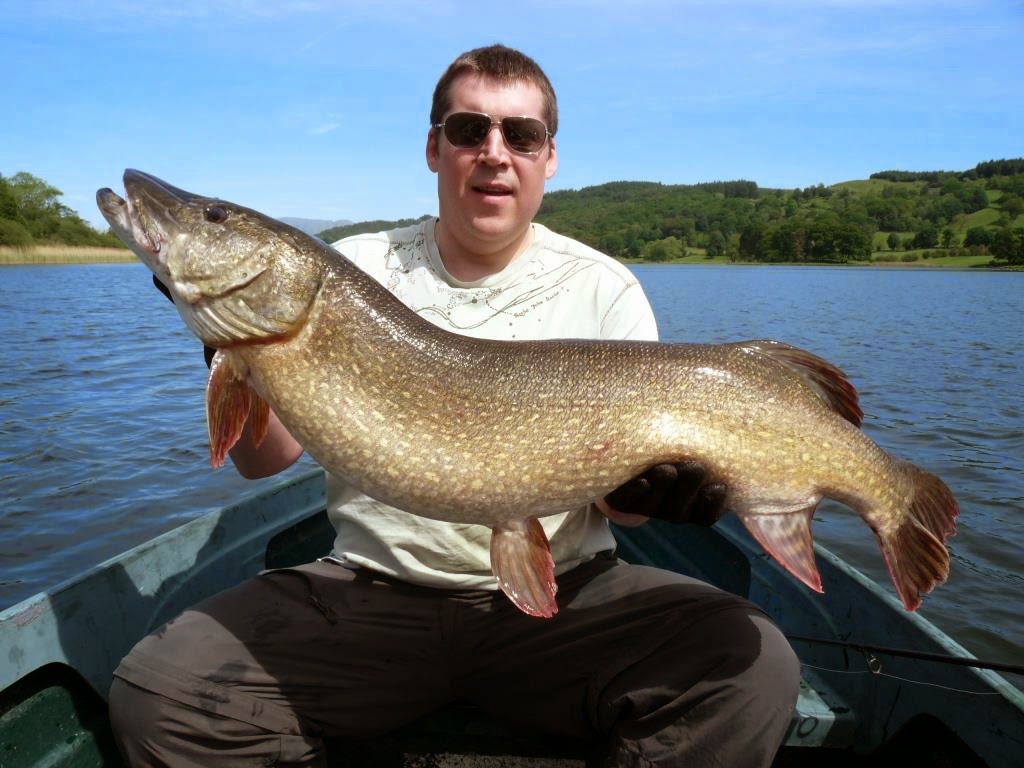 Posted by Esthwaite Water Trout Fishery at 02:31 No comments: