ESTHWAITE WATER TROUT FISHERY REPORT – 2/2/17
TROUT FISHING
The Trout fishing will start in earnest at the beginning of March! Watch this space folks, because we have great plans for the Trout stocking for the 2017 season .We have some cracking fish ear marked with our suppliers, so expect good things! Keep in touch via telephone 015394 36541 or social media to find out exact dates and further details!
PIKE AND COARSE
Words cannot describe what a fantastic winter Pike season it has been so far. I literally have a mountain of catch returns in front of me, so please excuse me if you don’t get a mention in this report. But please keep them coming, with pictures and we will mention your catch when we can. Once again in general terms we have had a reasonably trouble free winter weather wise and this has allowed anglers, both season ticket holders and day ticket fisherman a like to keep coming on a regular basis and get the time in when they can. But one thing is for sure the Pike fishing has been very consistent from the start! At the beginning of the season, lures and trolled deads outscored the static baits, however over recent weeks and with a huge drop in water temperature it has been the other way round, as the Pike became lethargic.
So just going through some of the recent captures. Season ticket holder Dan Whirtty has been a lucky boy fishing static deads from the boats, recording Pike of 13, 18, 20 and 21lb respectively. Sean Whitaker landed a nice brace, a 14lb and 19 pounder. Ian Bland had 3 to 17lb on lures and deads from the boats. Old Geoff “fish on” Birtwistle has reported an 18, a 2x 12, a 16 and a 19 pounder, plus jacks on static deads .  H.A.C member John Bradley reported a 10 a 14 and an 18 pounder to similar tactics.
Last years Grand Slam winner Ian Spence took to the boats and again reported a great multiple catch of 3 doubles to 15lb. Geoff Barton nailed a cracking 23 pounder. Tom Wignall lure fished from the boats and landed a lovely 17 pounder. Terry Blake reported a 16 pounder, again from the boats. Paul Mattinson reported 8x doubles over 2 trips , best 17lb. I even managed a days pleasure fishing myself last weekend and landed a cracking brace. A double and this immaculate 20 plus pounder! (see attached photo)
From the bank Stewart Mclandlish landed a true monster off the boathouse stretch on Herring. I have seen the photos, but unfortunately he did not have scales, but believe me this fish was an upper twenty at least, if not bigger! Those people that have seen the photos of this fish will know what I am talking about? Callum Hudson from Leeds fished the point opposite the ticket office last week and landed a brace of doubles to 17lb. H.A.C member David Black landed a cracking 21 pounder on static deadbait. Another H.A.C member Harry Poxon landed a 14 and a 17 pounder, again from the bank. Ben Ralph from Skipton landed a 17lb 9oz specimen off the car park. Also fishing off the car park season ticket holder Ian Driscoll landed a jack, a 16 and a 20lb’er again on deads.
The guided Pike fishing trips have been going very well this winter with only 2 blank days since the start of October. There have been numerous doubles and a good few twenty pounders caught by clients too. So if you fancy a great day out on the water with a guide, please do not hesitate to contact me. It could be the best days fishing you have ever had! Trips will be available until the end of March, so book early to avoid disappointment. Just as an example, Tom Buxton had a great day last weekend, landing an upper double and a personal best 20lb plusser ( see attached photo). Well done to Tom, cracking fish, hope to see you and your dad again soon mate!
Don’t forget we are now open year round for general Coarse fishing. Day tickets are £10 and the use of groundbait and maggots is permitted. Long range feeder tactics are best during the cold weather and the best of the fishing at present is off the point opposite the ticket office, the boathouse stretch on the Eastern bank and the Grubhole in the North basin. But expect these locations to change as the weather warms and expect all the Coarse species to be at their maximum weights prior to spawning. Happy days!
For daily updates, catches, reports and news please either telephone us prior to your visit or follow us on Facebook, Twitter and Google+.
Tightlines!
David Coleman M.I.F.M 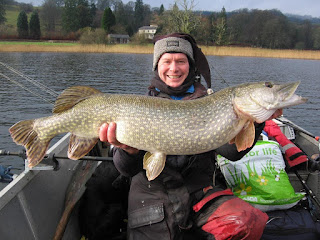 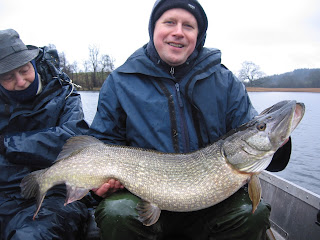 Posted by Esthwaite Water Trout Fishery at 03:38 No comments: