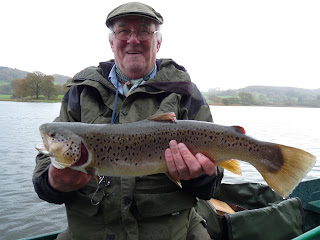 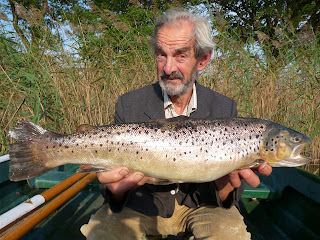 ESTHWAITE WATER TROUT FISHERY – REPORT 25/10/11
TROUT FISHING
Although the weather has been generally mild over the last few weeks, the fishing has been a bit tricky at times. Surface activity has been minimal, despite sporadic hatches of small buzzers and sedges. Best results have been encountered employing sinking lines and fry patterns such as cats whiskers, zonkers, minkies and floating fry. The fish have been close to the surface and worm fished 8 feet deep has also been producing the goods as well as spinners. Boat fishing has once again been the best approach, however the banking opposite the ticket office and the boathouse stretch on the Eastern bank have been throwing up a few fish also. Recent catch returns have included some very nice fish caught indeed!
Season ticket holder Jim Miller from Keswick has taken 5 trout on his last two visits. Fishing worm and fly (booby fished on an intermediate line ) from the boats, Jim has taken 4 rainbows to 4lb+ and a corker of a Brown Trout at approximately 5lb, which was returned to the water safely, ( see attached picture ).
Bob Bradley from Grange Over Sands had a day to remember taking a beautiful grown on Brown Trout of 5lb 12oz, plus 5 rainbows to float fished worm, from the boats. ( see attached picture ).
Another season rod that has been getting in on the action is Bill Shortall from Southport who took a nice brace of fish on worm from the boats. Bills best fish was a fine 4lb+ rainbow. ( see attached picture ).
Venue regular Richard Maddox, from Barrow in Furness had a belting rainbow on worm from the boats. Richard landed and weighed the fish at 7lb 3oz. He then put it back into the water to wash it and it shot off before he could get a good grip of it. Richard has now put a bigger priest on his Christmas list. Haha, nevermind Richard these things happen and you still came in to tell me with a smile on your face!
Providing the mild weather continues, prospects are looking good for the forthcoming weeks!
PIKE FISHING
The pike fishing season has started well, despite the mini heat wave experienced at the beginning of the month. With water temperatures quite high for the time of year the pike were in an obliging and aggressive mood, hitting and following lures as opposed to readily picking up static baits. This trend has continued throughout the month with some nice pike reported!
First up, Carl Berry from Blackpool took to the boats and nailed two double figure pike on lures from the boats. Carls fish weighed 14lb and 18lb respectively.
Also Jason Lunn, a big s club member from Morecambe took an 18lb snapper from the boats. This time to static smelt. Jason also had a good first day on the lake recently, sharing 4 pike to 15lb on lures with in house guide Dave Coleman.
Neil Titley from Essex also fished with Alex, our other in house guide and landed 5 pike to 18lb, again from the boats and again the bulk of the fish fell to lures!
For up the minute information log onto facebook or telephone us on 015394 36541.
Best Regards
David Coleman M.I.F.M
FISHERY MANAGER
Posted by Esthwaite Water Trout Fishery at 07:30 No comments: