ESTHWAITE WATER TROUT FISHERY REPORT – 27/12/13
TROUT FISHING
Although temperatures have been mild for the time of year, the weather has been generally unsettled which has kept angler visits down. Those that have fished for the trout , however have been encountering some good sport. Indeed George Talbot from Carlisle fished minkies on a sinking line to land 3 brownies from the boats in the North basin. Meanwhile Sam Johnson from Co Durham employed spinning tactics to take 4 brownies to 3lb+, again from the boats. Joshua Peart from Lancaster  fished legered worm from the bank to land a nice brace of brownies over the 2lb mark, as well as a surprise 19lb Pike.
Don’t forget we are on a catch and release policy for the Brown Trout until 15th March, however any Rainbows landed may still be retained!
PIKE AND COARSE FISHING
The Pike fishing has been on top form again with a number of fish reported on deadbaits and lures. Alan Appleton from St Helens landed a 16lb predator from the car park swim on static deadbait. Meanwhile Steve Milward from Cyprus took a 12 and a 15 pounder on similar tactics from the same swim.
Dave Simpson from Penrith however landed 3 double figure Pike the best tipping the scales at 21lb 2oz. All Dave’s fish were taken on lures from the boats.
Big s club duo John Ashurst and Stuart Fazakerley from Wigan have been consistent of late taking 12 Pike over 3 visits, with the best fish weighing in at 24lb 2oz. All John’s and Stuart’s fish have fallen a combination of lures and deadbaits fished from the boats. (see attached photo).
The coarse fishing is still on top form with some cracking bags reported from the boathouse stretch and the point opposite the ticket office. Clive Charter from Wigan had a hectic session over at the boathouse last week and reported that he could not keep a rod in the water for more than a couple of minutes and took a cracking 40lb+ net of roach, perch and hybrids. Don’t forget the use of maggots is permissible and the general coarse fishing tickets are available for £10 until 14th March!
Don’t forget to keep up with the fishing reports on a daily basis please find us on Facebook or follow us on Twitter for all the very lastest news and advice!
The staff at Esthwaite Water Trout Fishery hope you all had a great Christmas and wish you all a prosperous new year, tightlines!
Best Regards
David Coleman M.I.F.M 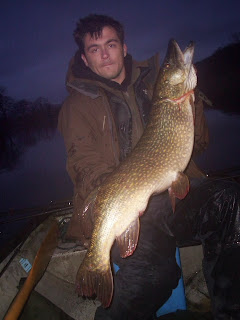 Posted by Esthwaite Water Trout Fishery at 03:27 No comments: