ESTHWAITE WATER TROUT FISHERY REPORT 15/1/15
TROUT FISHING
For all the Trout anglers out there, stocking will commence at the beginning of March!
Also we have the dates for the discounted fly fishing tuition for 2015. They are Sunday 22nd March, Saturday 18th April, Saturday 2nd May, Sunday 17th May, Sunday 28th June and Saturday 4th July. The sessions will start at 10am and finish at 2pm. The cost is £15 and participants must bring a hat and a pair of sunglasses for protection. All tackle is provided. Please contact the fishery for more details. Bookings for these days must be in advance!
PIKE AND COARSE
Despite the disruptive weather recently, the Pike fishing has been on top form, with fish succumbing to lures and dead baits. Both bank and boat anglers alike have been enjoying great sport, however boat anglers are reporting the bulk of the action.
Big s club member Chris Harris reported a nice 13lb specimen, taken on a trolled lure from the boats. Meanwhile Ashley Gray from Bolton fished from the boats and reported a 17lb’er on a lure and a 16lb’er on a Mackerel dead bait. Another Big s club member Ian Spence from Barnard Castle landed a 7lb’er and a 13lb’er on static Bluey from the boats.
Phil Pritchard was fishing with one of the Esthwaite guides and landed a 13lb’er on static dead bait and a 15lb’er on a lure, again from the boats. Season ticket holder Stuart Fazakerely from Wigan landed an 11lb’er and a 13lb’er on Smelt dead bait. Local rod Mat Mclean also fished from the boats and landed a jack and a 17lb 13oz snapper, to Mackerel dead bait. Meanwhile the best recently reported fish fell to John Roberts from Preston. John fished from the boats and took a nice brace of fish weighing at 18lb and 22lb 4oz respectively. Both fish fell to static herring! Chris Hayhirst from Manchester again fished from the boats and landed a 15lb specimen!
Not to be out done bank anglers Ian Clifford and Andy Butcher landed a jack, a 10lb’er, a 13lb’er a 17lb 10oz and a 17lb 12oz, all to static sea baits. Meanwhile Big s club member Reece Nicholson landed a fine 19lb+ specimen from the car park banking on static Herring! (see attached photo).
The general Coarse fishing on the lake is still doing very well and bags of 20-30lb have been reported regularly. Remember day tickets for the coarse fishing only cost £10. Maggots and ground baiting is permitted and tickets are still available until 14th March!
Best Regards
David Coleman M.I.F.M 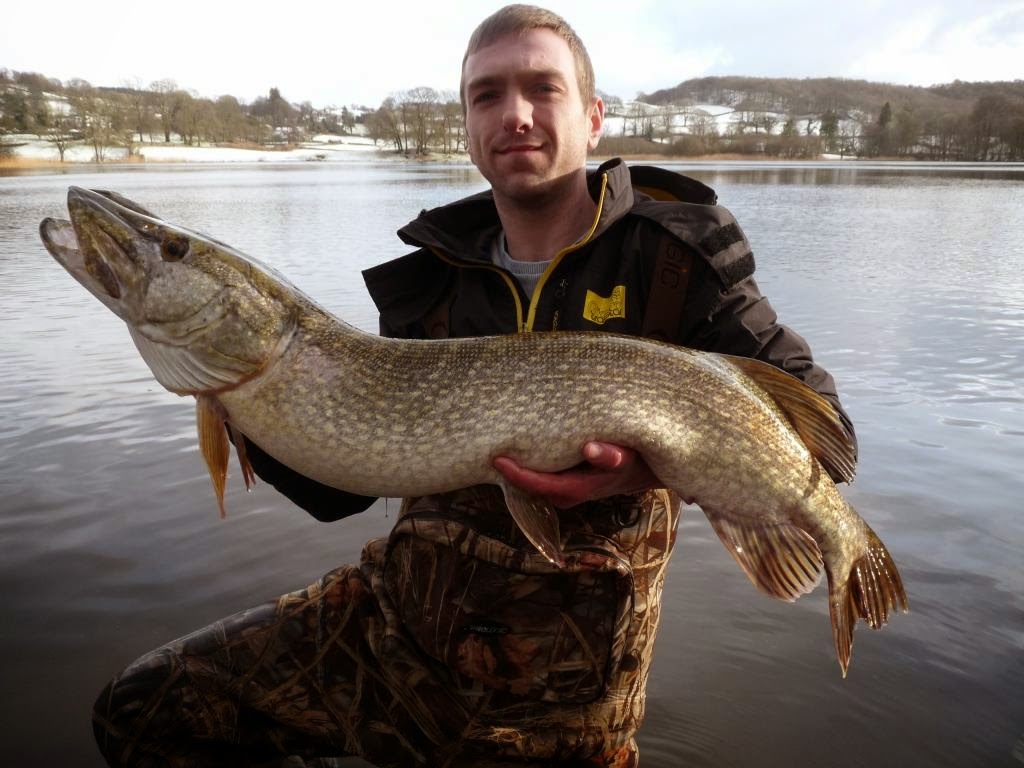 Posted by Esthwaite Water Trout Fishery at 06:29 No comments: