Esthwaite Water Trout Fishery Report 19/12/15
I would firstly just like to say, we have survived the recent flooding caused by hurricane Desmond and the roads are completely clear, so its business as usual. Also we are open throughout the festive period, the only day the fishery will not be attended is Christmas day. So if you are one of the die hard’s then just pop your money through the café letter box and enjoy your day out!
Trout Fishing
Not allot to report on the Trout fishing as the recent bad weather has kept angler visits down!
There was one chap from St Helen’s, Peter Lord who had a couple of nice brownies just in front of the ticket office. Fishing from the boats with sinking line and booby combo’, Peter landed fish to 2lb+.
Pike and Coarse Fishing
Once again and despite the bad weather the Pike fishing has been exceptional with many double figure specimens reported, including a few 20 pounders!
Hawkshead Angling Club member Harry Poxon did well last week, fishing on the Eastern bank and landed 2 nice fish to static Mackerel deadbaits! He landed an 18lb 8oz and a personal best 25lb 7oz Christmas cracker!
Ian Driscoll from Wigan fished from the boats with the Esthwaite guides and landed a 16 and a 22 pounder, again static deadbaits produced the goods.( see attached photo) These were Ian’s first ever Pike. So if you fancy a days guided Pike fishing, please do not hesitate to contact us. It could be the best day’s fishing you have ever had!
Simon Goodman from West Sussex fished herring from the car park swim and landed a 17 pounder. Meanwhile Chris Bell from Preston also had a 17 pounder on deadbait from the boats!
Again from the car park peg Pete Farrow from Preston landed a 22 pounder (see attached photo), caught on a joey Mackerel. Also landing a 20 pounder and a 16 lber, Dave Gardner from Newcastle was successful from the boats!
The mild weather has kept water temperatures up and the general Coarse fishing has been very good with plenty of 20-30lb+ bags taken on long range feeder tactics. Don’t forget we are now open all year for the silver fish and tickets cost just £10!
As this will be the last report of the year, I would like to thank all our customers for their continued support. We wish you all a very merry Christmas and a prosperous new year. Tightlines for 2016!
Best Regards
David Coleman M.I.F.M 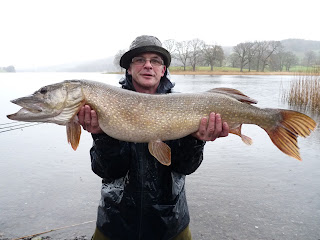 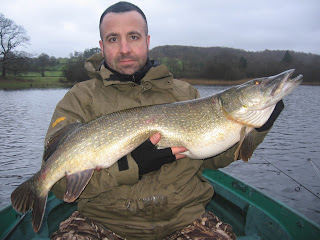 Posted by Esthwaite Water Trout Fishery at 02:21 No comments: