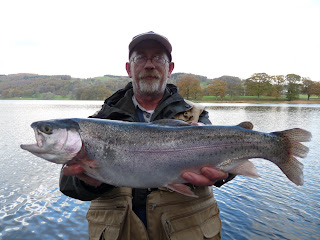 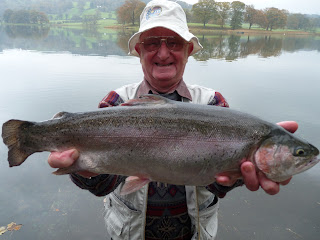 ESTHWAITE WATER TROUT FISHERY REPORT – 17/11/11
TROUT FISHING
The water clarity is now better than it has been since May and fish are feeding well, despite the falling temperatures. Hatches of small buzzer are evident and fish are feeding on the surface, albeit delicately. The fry have been the trout’s main target as they shoal tightly ready for the onset of winter and the best tactics have been the sinking line and fry pattern approach!
One such angler to employ these successful back end tactics is season ticket holder Jim Miller who used a Di-3 line in conjunction with cats whiskers from the boats to take 4 rainbows to 3lb+. Also Tom Nelson from Consett took a nice 4lb rainbow on similar tactics from the boats, plus 4 other back up fish. (see attached picture).
Worm and spin anglers have been doing consistently well also. Andrew Coates, who usually is a seasoned competition fly angler fished from the bank off the boathouse stretch with son Zac and took 3 rainbows to 3lb on worm.
Another bank angler Dave Bell a Hawkshead Angling Club member fished just outside the ticket office and caught 4 nice rainbows on legered worm.
Meanwhile season ticket rod John Gardner also fished worm, but this time from a boat and recorded 2 rainbows and 1 cracking over wintered brownie of 3lb+.
Richard Maddox from Barrow in Furness fished spinner from the boats to record 5 rainbows to 4lb 5oz ( see attached picture)
PIKE AND COARSE FISHING
The pike fishing continues to be good with many reports of double figure fish falling to deadbaits and lures. The fish are still mainly getting reported from the shallower spots on the lake, however this should change with the onset of winter as fish seek out the deeper stretches and follow the bait fish.
Grant Pearce from Darlington had a session to remember taking 3 double figure pike to 22lb on lures and static deadbaits from the boats.
Also Peter Johnson from Hexham took a 21lb snapper and 2 jacks on static deadbaits from the banking off the car park.
Prospects for the pike fishing over the forthcoming weeks looks promising as the biggest fish always show themselves between December and March!
Also on good form at present is the coarse fishing. Shaun Barrett and John Pearson from Leigh in Lancashire caught 30lb+ of Roach and Perch, some of which were over the 2lb mark on swim feeder and maggot from the popular and productive boathouse banking. Remember the coarse fishing permits to fish for the Roach and Perch are only £10 per day, however this price is not applicable to the Pike fishing.
For up to the minute information telephone 015394 36541 or follow us on Facebook and Twitter. For all other information log onto www.hawksheadtrout.com.
Best Regards
David Coleman M.I.F.M
FISHERY MANAGER
Posted by Esthwaite Water Trout Fishery at 07:10 No comments: