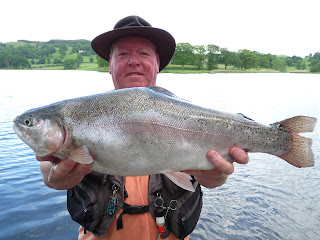 The fishing at Esthwaite Water has been challenging of late, with a myriad of fly life coming off the water the fish have been spoilt for choice. The damsels and dragon flies are now hatching with regular abundance. The alders and olives are still coming off the water, along with big buzzer and sedge hatches. To cap all this there has been good numbers of hawthorn flies, daddy long legs and beetles getting blown onto the water and the coarse fish fry which are now already an inch or so long have been featuring heavily in the trout’s diet. Morning and late evenings have been the best times to be out on the water and for the thinking angler who takes consideration to match the hatch have been encountering the best sport!
One such angler and Hawkshead Angling club member Eddie Edmundson from Kendal fished from the boats one evening with floating line and claret buzzers, took 8 rainbows to 2lb+ from Stockie Bay. H.A.C Secretary Dave Armstrong also landed a cracking 5lb rainbow from the boats. Dave took his only fish of the day on a home tied lure fished on a floating line. (see attached picture)
Meanwhile Peregrine Team Esthwaite member Jon Turner also fished an evening session from the boats and landed 6 rainbows to 2lb on floating line and invicta patterns!
Pete Welbourne also fished from the boats and landed 4 rainbows to 2lb 4oz on floating line and hares ear combinations.
Best recent fish was another cracking lump of a rainbow at 12lb taken by visiting angler John Morgan Parker from Crewe. John fished a white lure on a sinking line from the boats to record 7 fish in total.
The season rods are also finding the fishing challenging , however Mr consistent John Gardner from Morecambe has taken 11 browns and rainbows over 3 visits to the fishery, fishing from the boats and using a combination of fly and worm tactics. Jim Miller from Keswick has taken 8 trout in 2 visits and Richard Maddox from Barrow has taken 5 fish in 2 visits.
Any method anglers are also getting in on the action from both boat and bank with Wayne Egan  from Lincolnshire taking 7 browns and rainbows to 2lb on spinner from the boats!
Heat 4 of the Esthwaite Water 2012 Open Pairs Competition was contested last weekend and 8 anglers landed 17 fish for a total weight of 21lb 4oz. In second place Jon Turner and Stuart Hall weighed in 5 fish for 6lb 3oz and in first place Andrew Jones and Dave Mordew weighed in 7 fish for a total weight of 8lb 15oz. Both pairs now qualify for the grand final on Septemeber 9th. Well done to both teams! The next heat of the competition will take place on Saturday 30th June. Anyone wishing to enter this popular competition should contact the fishery to book your place.
Also to be held on Saturday 30th June the next discounted tuition will take place and once again please contact the fishery if you would like to book in. The cost for the session is only £10 and the session itself will be conducted between 10am and 2pm. Participants are reminded to bring with them a hat and a pair of sunglasses, however all tackle is supplied!
Best Regards
David Coleman M.I.FM
FISHERY MANAGER
Posted by Esthwaite Water Trout Fishery at 03:02 No comments: