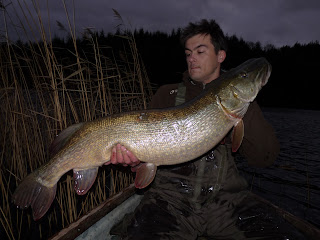 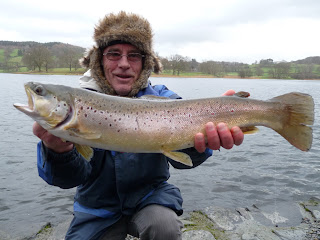 ESTHWAITE WATER TROUT FISHERY REPORT – 17/12/11
TROUT FISHING
Despite the cooler weather kicking in the trout fishing is still very good, for the time of year. Boat anglers are reporting good numbers of  fish, however the bank anglers are really producing some good bags also. The ticket office frontage is the hotspot at present and the fish are still in the shallow water hunting the fry and anywhere there is structure or decaying weed will be a good spot to try as the fry are shoaling tightly with  the onset of winter and are seeking the sanctuary of these areas. Swimming pool, Weather bay, Strickland bay , the ticket office frontage and Stockie bay have all been producing fish or showing signs of fish activity.
One angler who took advantage of the fry feeding was Peter Scott from Edinburgh, who fished the swimming pool from the boats and took 5 nice rainbows to 4lb+ on sinking line and floating fry imitations.
John Prescott (not the famous left jab Prescott), from Wigan fished zonkers and boobies, again on sinking line tactics in Stockie bay and landed 3 rainbows to 3lb+.
Bank anglers fishing worm outside the ticket office have been doing best of all. Season ticket angler and venue regular Richard Maddox has landed 7 trout in 2 visits. 4 rainbows and 3 browns to 3lb+. Meanwhile Hawkshead Angling Club members Ed Edmundson and Tony Hudson from nearby Kendal landed 1 brownie and 2 rainbows, again on legered worm. The duo also missed countless other bites.
Once again Dave Bell, another HAC member has been getting in on the action taking 2 rainbows and another cracking grown on Brown Trout, which was released over 4lb ( see attached photo ).
Prospects are looking good for the festive period, with plenty of fish still showing and no sign of a freeze up. Please contact the ticket office for all the latest news and advice!
PIKE FISHING
Once again there has been some nice pike reported over the last couple of weeks. HAC member Tim Carswell from Cockermouth legered deadbaits and took a nice brace of toothy critters of 18lb 6oz and 20lb 14oz respectively. Meanwhile Jason Jones from Cleveleys  reported a 22 pounder and 2 back up doubles again to  static deadbaits from the boats. Also fishing deadbait John Hicks from Grange took a 14 pounder from the car park banking.
Fishing lures from the boats Chris Harris, a Big S club member from Lancashire has reported several doubles to 18lb+ and a fine 20lb 8oz specimen.
However the best recent pike was taken, again by a Big S club member John Ashurst who took an impressive 27lb 14oz specimen on a lure fished from the boats ( see attached photo).
The fishery will be open throughout the festive period and for all those customers that can’t make it until the new year we would like to wish you a Happy Christmas and a fantastic rod bending new year, all the best !
Best Regards
David Coleman M.I.F.M
FISHERY MANAGER
Posted by Esthwaite Water Trout Fishery at 05:13 No comments: 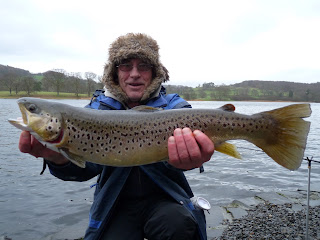 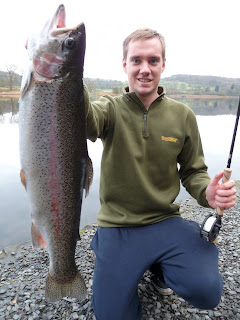 ESTHWAITE WATER TROUT FISHERY REPORT – 1/12/11
TROUT FISHING
The trout fishing is excellent at present and with this mild spell of weather set to continue, prospects for the forthcoming weeks looks fantastic, with good numbers of trout still showing in the lake! The fish are definitely on the fry, big time. Best areas include the ticket office frontage, strikland bay, weather bay and the swimming pool area of the lake. Find the decaying weed or structure and you have pretty much found the fry that the trout are searching for!
Esthwaite Peregrine and England international squad members Alistair Beaumont and Dave Morris fished boobies and blobs and took 7 rainbows to 5lb+ from the boats.
Paul Gratton from Blackpool fished the swimming pool from the boats and landed 4 rainbows to 2lb+ on sinking line and cats whisker’s.
Meanwhile employing spinning tactics Andy Murray from Lancashire took 3 trout to 3lb and a 6lb pike!
As well as the boats, the ticket office frontage from the banking is producing big style. Hawkshead Angling Club member James Timmins took a cracking rainbow of 5lb 8oz on worm.
From the same swim, Anthony James and Chris Lawler, from the Manchester area, fished worm again and landed 6 rainbows to 5lb (see attached picture).
Season ticket holders Richard Maddox and John Gardner have also taken a good few fish from the same area using legered worm. A mixture of browns and rainbows to about the 3lb mark.
However the in form angler at present on the trout front is Hawkshead Angling Club member Dave Bell from nearby Windermere. Over 4 visits, Dave has taken 14 trout. A mixture of both rainbows and browns. Again using a combination of legered and float fished worm, he has taken rainbows to 5lb and browns to a similar weight. Yesterday he produced the goods again. Catching and safely releasing 4 trout. All of which were Brown Trout (see attached picture of the best one- 5lb).
PIKE FISHING
The predator fishing is also good at present with a number of fish being reported from both boat and bank.
Hawkshead Angling Club member Alan Dixon from Ulverston fished the car park banking with deadbaits and landed 3 pike to 16lb.
Meanwhile Big S club members Steve Hincks and Darren Lord from Blackpool have been boat fishing the lake and have reported plenty of doubles taken on a variety of methods, including fly, lures and deadbaits.
Ian Sorvel from Widnes landed a 2olb pike on lamprey section from the boats.
Nathan and Brent Dransfield from Leeds also fished lures from the boats. Using big pike spoons the father and son duo took pike to 10lb+ and 2 trout of 5 and 8lb respectively!
Best reported pike was taken as part of a 3 fish haul by Ian Johnson from Crewe. Ian fished from the boats and landed 2 on float legered static deadbait. However his best fish a 24lb 2oz specimen was taken on a lure!
Anyone wishing to join Hawkshead Angling Club for the 2012 season should contact the secretary Dave Armstrong , by telephoning 01946 691889 or email mrdarmstrong@sky.com. The annual fee is £135 for adults and £31 for juniors and entitles you to 12 months unlimited fishing on beautiful Esthwaite Water. Remember it doesn’t matter where you live as there is now NO eligibility boundaries!
Best Regards
David Coleman M.I.F.M
FISHERY MANAGER
Posted by Esthwaite Water Trout Fishery at 03:42 No comments: