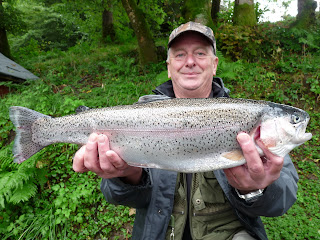 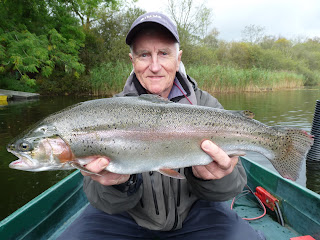 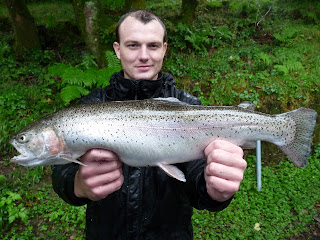 ESTHWAITE WATER TROUT FISHERY REPORT – 28/9/11
With autumn fast approaching, the lake continues to fish extremely well. The fish are now officially back near the surface, however there are still a few fish getting caught as deep as 15 feet. Mornings and evenings still seem to be the best times for surface feeding with good hatches of buzzers and sedges provoking a lot of activity. When conditions are right, its well worth presenting daddies and hoppers too! The bulk of the fish though are being taken on the intermediate and sinking lines, in conjunction with fry patterns and damsel nymphs. Best areas from the boats include the weather buoys and boathouse stretch on the eastern bank in the North basin and the cages and ticket office frontage in the South basin. Best bank fishing is still the boathouse banking on the eastern shore and the point opposite the ticket office.
Season ticket holder John Johnstone from Surrey caught 5 rainbows from the boats in front of the ticket office. John employed sinking line and zonkers to take some beautifully conditioned fish to 4lb 1oz [ see attached picture ].
Another season rod who is finding the fish is John Gardner. He caught 16 rainbows over 5 visits from the boats on a combination of fly and worm, with his best fish tipping the scales at 2lb 8oz! Meanwhile Jim Miller has taken 18 rainbows and browns to 3lb+, over 4 visits! Richard Maddox has landed 8 in two visits, again to a combination of fly and worm. Also Tony Topup took 1 brownie and 4 rainbows on worm and fly!
Jim Ratallic from Leicester fished a floating line and damsels from the boats to record 8 rainbows to 2lb+.
Worm and spin anglers have really been getting stuck into some great action of late too. Mark Blaylock from Carlisle fished from the boats and took 4 fish on mepps spinner, with his best fish a stunning looking blue trout of 3lb 12oz.
Jamie Hilton from Leigh took 3 rainbows on spinner to 4lb from the boats [ see attached picture ].
Meanwhile Reg Bright from Dumfries took 4 rainbows to 4lb 8oz on spinner from the boats [ see attached picture ].
Volodymyr Chystakov from London experienced a bank session to remember and took 6 rainbows from the ticket office banking on spinner to 2lb+.
The final of the 2011 Esthwaite Water Open Pairs competition was contested at the weekend with 24 anglers weighing in 65 trout for a total weight of 109lb 4oz. In third place Adam Larbalestier and Ben Bayliss weighed in 8 fish for 12lb 15oz. In second place John Henshall and Mike Laycock weighed in 8 fish for 14lb 1oz and in first  place Tom Nelson and Jon Henderson stormed the field of opposition and weighed in 9 fish for 14lb 13oz. Well done to those boys and a full report will follow soon!
For up to the minute information telephone the fishery on 015394 36541 or follow us on Facebook or Twitter!
Best Regards
David Coleman M.I.F.M
FISHERY MANAGER
Posted by Esthwaite Water Trout Fishery at 07:05 No comments: 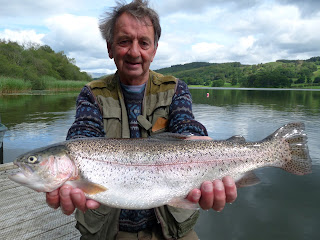 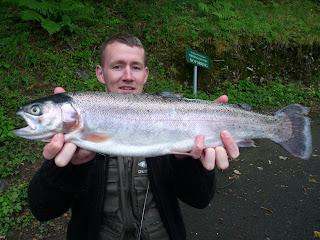 ESTHWAITE WATER TROUT FISHERY REPORT – 1/9/11
During the latter part of August, Esthwaite fished extremely well again. What used to be considered as the ‘Dog Days’ of summer has been proved over the last few years to be a  thing of the past, with better fishing experienced during July and August, than say June. With are first wave of warm weather coming as early as April this year and the lake stratifying much earlier than usual, it has been a peculiar year to say the least!
Anyway back to the fishing and as I write this report cooler weather has been dominant over the last couple of weeks and with longer colder nights, the water is cooling slowly and encouraging the fish closer to the surface for longer periods during the day and fly fisherman are starting to reap the rewards of this with some cracking sport reported. There are still huge hatches of olive and fawn buzzers, along with sedges and damsels and when the fish are up on the top, daddies and hoppers are also worth a try. When the fish are not free rising try fry patterns on a sinking line for best results!
Season ticket angler Bill Hethrington from Barrow took 5 rainbows to 3lb+ on sinking line and lures from the boats.  Another season ticket angler who has done well on fly is good ol’ Jim Miller from Keswick, he also took 5 rainbows to 5lb 8oz. Jim’s fish were all taken on cats whisker and blob combo’s. Richard Maddox continues his good run with 22 rainbows and browns over 3 visits . His best fish was a rainbow of 5lb 8oz and all ‘Dickies’ fish came from the boats, on a combination of tactics, including fly and worm!
Hawkshead Angling Club members Geoff Gregory and Jamie Timmins also took to the boats for an afternoon and evening session and landed 21 rainbows and browns to 3lb 8oz. All Geoff’s and Jamies fish were taken on worm and spinner!
Season rod John Gardner has also been consistent, recording 17 rainbows and browns over 3 visits to 4lb 8oz. Again John’s fish were taken on a combination of fly and worm fished from the boats [ see attached photo ].
Grant Hart from Darlington also had a superb 4lb 2oz rainbow on a spinner fished from the boats [ see attached photo ].
Best areas on the lake continue to be the weather buoys in the North basin and the cages area in the South basin. Best bank fishing is still from the point opposite the ticket office and the boathouse stretch on the Eastern bank!
For up to the minute information please follow us on Facebook and Twitter. For all other information log onto www.hawksheadtrout.com.
Best Regards
David Coleman M.I.F.M
FISHERY MANAGER
Posted by Esthwaite Water Trout Fishery at 07:21 No comments: