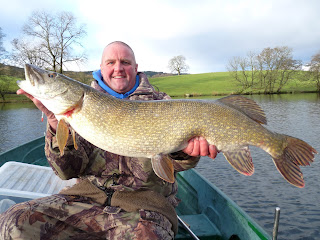 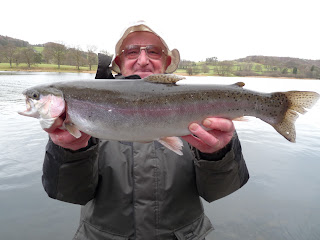 ESTHWAITE WATER TROUT FISHERY REPORT – 12/1/12
TROUT FISHING
The mild winter continues and so does the excellent trout fishing. The ticket office frontage is still the best place to fish with the worm, however the boat anglers are reporting one or two fish as well.
Fishing legered and float fished worm adjacent to the ticket office seems to be the most popular and effective method and area at present with numerous fish reported from here.
Hawkshead Angling Club member Dave Bell from nearby Windermere has landed 7 trout in 3 visits. Dave has taken both rainbows and browns to 2lb+, all on worm from here.
Also doing well is season ticket holder Richard Maddox who has been catching on similar tactics and methods. Richards best fish was taken over the festive period and weighed in at approximately 5lb.(see attached photo)
Meanwhile Paul Forsyth from Derby fished from the boats with fly to record 4 Rainbows to 4lb+ on sinking line and booby/floating fry combinations.
There are very few Cormorants on the lake this winter, so providing the weather stays mild, prospects for the trout fishing over the forthcoming weeks looks good!
PIKE FISHING and COARSE FISHING
Once again there has been a number of Pike reported in recent weeks. Geoff Birtwistle from Bury has taken quite a few fish over a number of visits. One session produced 3 doubles to 18lb+ on deadbaits from the boats. Other sessions have produced the odd double, however Geoffs best fish was a 21lb beauty taken on a smelt deadbait (see attached photo).
Mike Atherton from Blackpool took a fine 16lb Pike while static deadbaiting from the boats.
Nigel Wood from Lincoln took a brace of snappers. A 9 pounder and an 18lb 3oz fish to similar tactics.
Big s club member Chris Harris has landed plenty to 15lb+ on lures fished from the boat.
Robert and Tom Clarke from Fleetwood also deadbaited and took 3 Pike to double figures.
Chris Presland from Newcastle took a nice 18 pounder on the fly from the boats and new Big s club member Joe Southern from Bacup in Lancashire took a  fine 21lb Pike , again on static deadbaits from the boats.
The coarse anglers are still reporting excellent sport with quiver tipped maggot tactics, with plenty of double figure bags and given the right conditions 20-30lb bags have been commonplace.
Please telephone the ticket office for all the up to date information!
Best Regards
David Coleman M.I.F.M
FISHERY MANAGER
Posted by Esthwaite Water Trout Fishery at 07:02 No comments:

Email ThisBlogThis!Share to TwitterShare to FacebookShare to Pinterest
Posted by Esthwaite Water Trout Fishery at 06:55 No comments: