ESTHWAITE WATER TROUT FISHERY REPORT – 1/4/16
TROUT FISHING
The lake received its first stocking on March 3rd. With 750 top quality triploid Brown Trout stocked and another 750 went in the following week! Sport has been very good from the word go, with fish falling to all methods including  fly, spinner and worm . Both boat and bank anglers are doing well , but boat anglers are getting a higher success rate, with the freedom of movement as the newly stocked fish are still congregating in small shoals.
The South end of the lake is still fishing best and Stockie Bay and the car park are throwing up the most fish! However the Swimming Pool and the Grubhole in the North basin is also producing numbers of Trout.
Steve Watson from Wolverhampton fished from the boats and landed 4 nice brownies on floating line and buzzer combo. Peter Johnson from Windermere also opted for the imitative approach, fishing buzzers and hares ears, landing 7 Trout to 2lb+, again on a floating line set up!
Meanwhile Wigan based John Cooper landed 4 Trout, including an over wintered specimen of 4lb 8oz on worm from the car park banking. However the best fish so far has fallen to Ian Driscoll from Wigan who landed a cracking over wintered fish of 6lb 9oz and was taken on a spinner!
We still have places left on our discounted fly fishing tuition days, only £20 per head. Dates include 16th April, 7th May, 29th May, 4th June and 16th July respectively. Please telephone Dave on 015394 36541 to book your place!
PIKE AND COARSE FISHING
What a cracking end to our Pike season we had with numerous double figure and twenty pound plus specimens reported on lures and deadbaits. Graham Dwyer from the Wirral boat fished using static deadbaits and landed a 10lb and a 16lb 1oz Pike. Steve Coward and George Johnson from Sunderland bank fished and landed specimens of 13lb, 15lb and 18lb 8oz. Season ticket holder John Ashurst landed a 16lb’er. Phil Pratt landed 4 Pike to 17lb 8oz on lures and deads from the boats. Nige Cooper fished from the boats and landed a jack , a 15 and an 18lb’er.
Geoff Carlson fished the boathouse banking and landed a jack and a 16lb 1oz fish. Paul Cooper from Hereford landed a 15lb’er on Herring. John Sherlock from Wallasey fished fly and took a jack and a 15lb’er from the boats. Mark Billington landed a 14, 2x 16lb’ers and an 18lb’er, again from the boats. Egidijus Anickas from Nelson landed 4 Pike to 15lb on lures from the boats. Jim Scott landed a 13, 14 and a 16lb’er on deads from the bank. Chris Harris had 3 doubles to 17lb on trolled lures. Ted Crush from Kent landed another 2 Pike to 18lb. Sean Whitaker landed 3 to 18lb. And Ian Bland landed 3 to 15lb on lures and deadbaits.
Geoff Birtwistle from Bury landed a personal best 21 pounder on Mackerel from the boats.(see attached photo). Last but certainly not least John Bradley landed 6 Pike including 2 x twenties. A 21lb 2oz and 21lb 4oz respectively on staic deadbaits.(see attached photo). 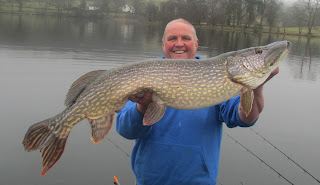 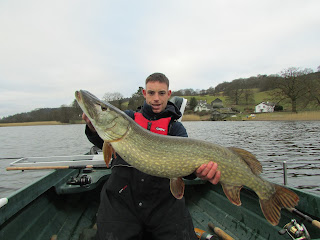 Posted by Esthwaite Water Trout Fishery at 02:35 No comments: