ESTHWAITE WATER TROUT FISHERY REPORT – 13/4/11
Spring is now officially here. The weather has been mixed, but generally mild and the lake is fishing extremely well to all methods and from both the boats and the banking.
Buzzer hatches have been plentiful as have olives and sedges. Alders are also starting to hatch in number.The best of the imitative fishing has been at either end of the  day. However there are some days were conditions have been perfect with fish rising freely all day! Indeed someone who enjoys the imitative approach is Ian Jones from Swarthmoor. Ian fished the north basin around the Hostel Beck and Grubhole area from the boats and took 5 rainbows to 3lb+, all on Ptn’s and buzzer patterns.
Also fishing fly Will Horne from took 5 rainbows to 3lb 8oz again from the boats. Will’s fish were taken on Yellow Dancer’s and Hare’s Ear’s.
Meanwhile venue regular Jim Miller from Keswick landed 9 rainbows to 3lb+ from the boats on damsel and cruncher nymph combinations.
Season ticket angler John Johnstone had a week to remember. John fished various fly patterns, including lures and nymphs to take 52 fish in 8 days fishing from the boats. Most of John’s fish were rainbows, to 3lb 2oz, however 16 fish were browns to 2lb 8oz.[see attached picture of one of Johns rainbows].
Bank anglers have also been experiencing superb sport with H.A.C members Geoff Gregory and Jamie Timmins from Barrow in Furness taking 20 fish to 2lb 8oz from the car park area of the lake.
Also fishing from the car park James Nicholson from Cleator Moor took 2 rainbows and then had an experience he will never forget when he hooked into a whopping 27lb pike, taken accidently on worm and sweetcorn combo’. Full credit to James for actually managing to get the leviathan in on 6lb line!
On the competition front reigning pairs champ’ Peter Crowe won the Esthwaite Water Troutmasters fish off weighing in 6 rainbows for a total weight of  12lb 9oz. Peter now goes onto to represent the fishery at the grand final, held at Grafham Water next month. Good luck Peter, I am sure you will do us proud!
Last weekend heat 2 of the Esthwaite Water 2011 Open Pairs Competition took place, with 12 anglers weighing in 15 rainbows for a total weight of 27lb 8oz. On a bright sunny day conditions were tough and this reflected in the situation at the weigh in. In second place Blythe Palmer and Richard Landsbury weighed in 4 fish for 6lb 10oz and in first place were the worthy winners and the engine of the England Youth squad, duo John Macintosh and James Atkinson who weighed in 5 rainbows for 8lb 8oz. Both pairs now go through to the final in September [see attached picture]. The next heat of the open pairs will be on Saturday 14th May. Please telephone the ticket office on 015394 36541 to reserve a place.Each contestant receives a Rovex reel case worth £19.99.
Hawkshead Angling Club still have a few places left for the 2011 season and there is now NO geographical boundary for membership eligibility. The cost is £135 for adults and juniors are £31. Please contact club secretary Emma Macintosh on 015394 36116 or email alex@garishglobes.co.uk. This is a fantastic opportunity for anyone to join this fantastic club and indeed to fish the beautiful Esthwaite Water.
For the most up to date information find us on Facebook!
Best Regards
David Coleman M.I.F.M
FISHERY MANAGER 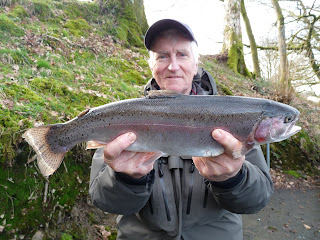 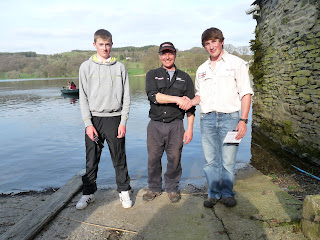 Posted by Esthwaite Water Trout Fishery at 09:10 No comments: