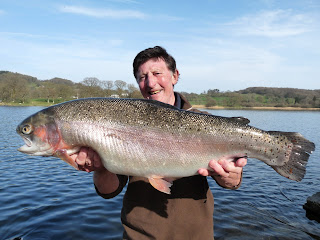 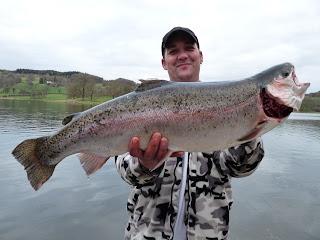 ESTHWAITE WATER TROUT FISHERY REPORT – 17/4/12
The fishing over the Easter period has been little short of spectacular, with some impressive catch returns submitted. Throughout the warmer weather there have been some fantastic hatches of buzzers, olives and alders and top of the water fishing was spectacular at times, however during periods of cooler weather, associated with the April showers and cooler winds, nymphing and lure tactics have been the favoured tactics to adopt!
Season ticket holder Jim Miller from Keswick has been on top form taking 42 fish over 4 visits to the fishery. Jim has taken the majority of his fish on slow sinking lines and cats whisker/ blob and diawl bach combos, fished from the boats. Another season rod that has doing well is John Gardner from nearby Morecambe. John employed cats whisker and damsel patterns and has caught 18 fish in 2 visits, again fishing from the boats. Whereas Richard Maddox has taken 29 trout over 2 visits on fly and spinning tactics.
Over the Easter break, its not just been about the quantity of fish reported, but the quality in some cases has been phenomenal. Indeed Ian Bentley from Ribchester bank fished in Stockie bay and latched into an absolute monster of a rainbow at 13lb, caught on spinning tactics. (see attached photo). Also Lee Gallagher from Windermere also fished in the same area, but from a boat and took 8 trout in total. Lee’s best fish was an 11lb rainbow and a cracking fish also. Lee landed his fish on spinners too.(see attached photo).
John Johnstone from Surrey took the place apart on his latest visit. Fishing from the boats with mainly Damsels and Cats whiskers in conjunction with slow sinking lines John recorded 121 rainbows and browns to 3lb+ over a 10 day period!
Meanwhile England Youth squad member John Macintosh fished the washing line tactic with a booby on the point and a variety of nymphs and buzzers to record 6 rainbows from the boats in the South basin.
Bob Swann from County Durham visited the fishery last week and had 14 rainbows to the boat by employing an intermediate line and dabblers. Bob also took a 15lb Pike which gave him the run around on fly tackle.
Emile Fraczek from Grasmere fished spinner to take a fabulous 7lb 9oz trout from the boats. The fish was returned safely to the water!
The Easter period has seen the kids back on the bank in numbers and plenty of smiling faces with the good fishing that has been experienced lately. The Smith family from Cheshire had a day to remember, landing 12 trout on float fished worm. Oscar, Joe and Eugene all got in on the action to round off a day to remember!
Don’t forget there are still places left for this weekends Open Pairs competition, heat 2 on Saturday April 21st. If you are wishing to fish the competition please get in touch A.S.A.P to reserve your boat!
Also the next discounted tuition day will take place on Saturday 28th April. Participants will need an EA licence and a brimmed hat and a pair of sunglasses. These courses are not to be missed and only cost £10 for a full 4 hours fly fishing tuition. The course starts at 10 am and finish at 2 pm. Please contact us on 015394 36541 or email trout@hawkshead.demon.co.uk.
Best Regards
David Coleman M.I.F.M
FISHERY MANAGER
Posted by Esthwaite Water Trout Fishery at 02:42 No comments: