ESTHWAITE WATER TROUT FISHERY REPORT – 16/6/16
Despite the recent hot weather and cooking water temperatures, the lake has been fishing very well for the Trout. Fly anglers have sruggled with surface activity, however fish have been coming to the surface to feed for brief intervals during the mornings and late evenings. There’s plenty of fly life about, buzzer, alders, sedge and damsels all hatching in abundance. Worm fisherman on the other hand have been doing very well indeed, due to the fact the Trout have been predictably holding deep and presentation at 20 feet down is achievable all day long!
John Parks from Preston fished from the boats and landed 9 Brown Trout on float fished worm. Stanley Bishop from Shrewsbury fished similar tactics and landed 5 nice fish to 2lb+. Arthur Peterson from London also fished deep from the boats and landed 7 brownie’s.
From the banking Hawkshead Angling Club member Harry Poxon landed 4 nice Trout on legered worm from the bank. Meanwhile Chris Brant and Steve Bool from Surrey landed 24 Trout between them on legered worm!
One or two fly anglers have got amongst the fish when conditions have been right! Dave Driscoll from South Wales fished cats whisker on a Hi-d line from the boats and took 5 nice fish, one being an over wintered beauty of 3lb+. Also Reg Holden from Berkshire fished deep with buzzer patterns and landed 4 Trout.
Last weekend we hosted the Esthwaite Water Kayak Grand Slam competition. 31 anglers fished the competition and most of the contestants managed the Grand Slam of catching all three species of Trout, Pike and Perch. So the whole weekend of camaraderie was a resounding success!
In third place was Chris Mccauley with 143cm. In second place was Graham Busuttil with 157cm and Paul Fennell won the competition with an overall length of 158cm. Well done Paul, thats the second time he has won this competition, top angling mate!
Last but not least Ben Pickering won the junior section of the competition with an overall length of 58cm.Well done Ben!
A big thank you goes out to the competition sponsors Lowrance and Berley Pro for supplying some fantastic prizes!
Anyone interested in fishing next years Esthwaite Water Kayak Grand Slam should contact Sam Baxter on 07981987188.
Don’t forget folks that we are now open year round for general Coarse fishing. Day tickets cost just £10. This is a fantastic opportunity for the avid Coarse angler to target Esthwaite’s pristine Coarse fish stocks of Bream, Roach, Rudd, Perch and Eels. Pike fishing is NOT included and we still maintain a strict close season for the Pike from October 1st until 31st March!
To keep up with all the very latest on the fishing here at Esthwaite Water please follow us on Facebook, Twitter and Google+!
Best Regards
David Coleman M.I.F.M 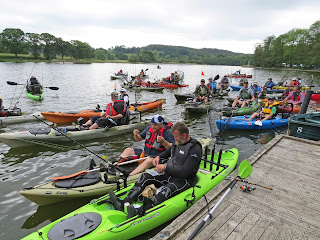 Posted by Esthwaite Water Trout Fishery at 06:55 No comments: